The Schomburg Center for Research in Black Culture, the foremost collection of archival materials relating to African Americans, has produced a Web site that gives a glimpse of the many rich visual materials it holds. The majority of the exhibition focuses on the postCivil War period, with some images dating to the 1920s. The exhibit currently contains nearly five hundred images depicting the variety of life for African Americans in the United States. 1860s newspaper engravings depict children in freedmens schools from Washington, D.C., to New Orleans, Louisiana. Older students at Tuskegee, Hampton, Fisk, and the Lincoln School for Nurses appear in photographs from the 1880s to the early 1900s. Drawings and photographs of black men serving in the army during the Civil War and World War I display the opportunities and the hardships of enlistment. The numerous depictions of family, religious, and leisure activities include a group of young people surrounding a bicycle and studio portraits of children, wedding couples, and families. Two early 1900s postcards depict a baptism in the Ohio River near Louisville, Kentucky. The collection contains numerous drawings and photographs of black laborers, mostly on southern farms and plantations. The Schomburg plans in future to add images of 19th-century continental Africans and African peoples in Central and South America and the Caribbean. 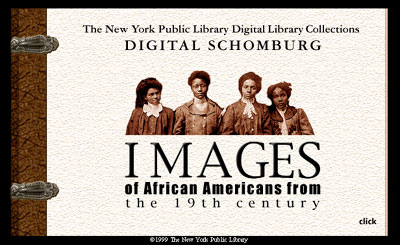 One could spend hours browsing through the nearly five hundred depictions of African Americans. But many of these images call for greater contextualization, particularly the photographs: what was the role of photography in depicting an emerging black middle class and in documenting the black working class? Who were the various photographers responsible for the studio portraits? The introductory statements by Schomburg director Howard Dodson and curator Mary Yearwood give only the broadest overview of the images. Yearwoods essay indicates that many of the images are selected from larger collections that contain substantial bodies of letters, diaries, minutes and other textual documents—a hint to researchers to dig deeper for more information.

The functional index headings include education, labor, portraits, and slavery, among others. One can also search the collection by keyword. Search results are presented in one- or two-line descriptions, without thumbnail images or dates that might help one sort through results. Within a group, one cannot move from image to image but must return to the search results to view the next image. These limitations make the site a somewhat clumsy tool for the researcher.

Overall, this is a fascinating collection of images. It will be of most use to researchers who already know a fair amount about particular time periods and are able to provide fuller context themselves to the pictorials. It should inspire greater interest among historians of African Americans in understanding the variety of ways in which others depicted African Americans and African Americans depicted themselves.