Public reaction and organized resistance to U.S. foreign policy is a rich subset of diplomatic history that is often overlooked in textbooks and teaching. Jim Zwick’s extensive Web site, Anti-Imperialism in the United States, 1898 -1935, offers a model for exploring this topic. It introduces the first organizations that opposed U.S. territorial and economic imperialism and makes their political analysis, literature, and cultural contribution to U.S. political culture available to a wide audience. 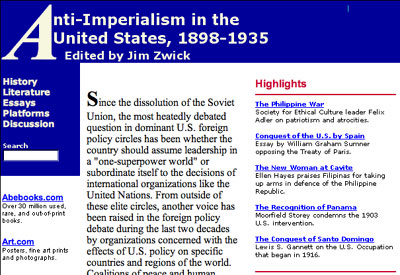 Largely an archival collection of primary documents related to anti-imperialist movements with essays that provide historical context, the site is impressive in its breadth of material. The site brings together hundreds of examples of literature, essays, political cartoons, photographs, and advertisements from the 1890s through the 1930s. Zwick provides cogent contextual information for the primary documents through a series of articles and introductions to the various collections. The largest collection focuses on the Anti-Imperialist League (1899 to 1921), but the site includes significant documents related to the major groups that followed such as the Haiti-Santo Domingo Independence Society, the American Fund for Public Service Committee on American Imperialism, the All-American Anti-Imperialist League, the American Civil Liberties Union, and the Society for Ethical Culture.

Presenting this span of anti-imperialist organizing reveals the similarities between the turn-of-the-century movement and nonintervention activists throughout the twentieth century. One of the strengths of the site is how Zwick explores the links between movements through individuals such as Oswald Garrison Villard, Moorfield Storey, Jane Addams, and Scott Nearing, who were active in a wide range of organizations. Another strength is the inclusion of many hard-to-find documents such as those by Filipino writers, comprehensive bibliographies for all the topics (including links to purchase books online), and guides to collections and resources.

The site is organized by type of document, but the categorization is not always transparent. The History section contains articles and essays by Jim Zwick that provide context for the primary documents that are organized under Essays and Platforms. Many of Zwick’s essays in the History section, such as “The Social Gospel vs. Imperialism”and “Suffrage and Self-Determination: Women in the Debate about Imperialism,” are followed by links to primary documents, which makes this section an ideal starting point for working through the issues and material. The Literature section offers introductions to authors and poems, stories, essays, and satire by writers such as Mark Twain, Finley Peter Dunne, Katherine Lee Bates, and Stephen Crane. Discussion pages focus on specific types of documents or are general forums on anti-imperialism and current events.

Anti-Imperialism in the United States is only one section of a larger site edited by Zwick, BoondocksNet.com, that encompasses broad notions of U.S. imperialism and the U.S. place in the world and enriches the anti-imperialist materials. With sections ranging from “World’s Fairs and Expositions: Defining America and the World, 1876–1916&#” to “The Kodak vs. the King” on images of atrocities in the Congo, Zwick explores the cultural aspects of U.S. imperialism. The BoondocksNet.com home and search pages also provide links to a large collection of visual material—political cartoons, advertisements, and photographs. This site is an incredibly rich and valuable resource for scholars and teachers; its only shortcoming is the absence of guidance for teachers on how to include this material in high school or undergraduate history courses.