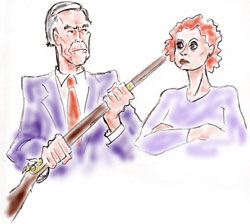 The Second Amendment Under Fire: The Uses of History and the Politics of Gun Control

With the National Rifle Association and a “million moms” squaring off over American gun control laws, historian Saul Cornell explores the meaning of the Second Amendment to the U.S. Constitution and Americans’ widely divergent understandings of the “right to bear arms.” Cornell closely examines the debates that surrounded the ratification of the Bill of Rights, and the different interpretations that historians and legal scholars have subsequently brought to bear on those debates, to make his case about the right to gun ownership in the contemporary U.S. (Posted January 2001)

No topic in contemporary American political life seems more bound up with the complex mix of myth and reality that defines our history than the debate over gun control. To find a compelling example of why “history matters” one need only look at the current debate over the meaning of the Constitution’s Second Amendment. When several hundred thousand protestors gathered on the National Mall near Capitol Hill on May 14, 2000, part of the Million Mom March demanding tougher gun control laws, actress Susan Sarandon reminded the audience that the Second Amendment was a product of a different world where a musket, not an Uzi, was the weapon of choice of a well-regulated militia. She asserted “A three-year-old cannot operate a musket as easily as a three-year-old can pull a trigger now. There are guns out there that had nothing to do with our forefathers.” After affirming her support for the Constitution, Sarandon recommended that those who opposed gun control on Second Amendment grounds be given muskets.

The very same musket that Sarandon used to portray the obsolescence of the Second Amendment also was used as an icon of near-religious significance by Charlton Heston, president of the NRA, the most powerful gun rights group in contemporary America. Heston has described the Second Amendment as America’s “First Freedom,” the foundation for all of the other rights contained in the Bill of Rights. In the climactic finish to his recent presidential address to the NRA’s annual convention (during the very same month as the Million Mom March), Heston lifted a replica of a Revolutionary-era musket above his head and declared that “I’ll give up my gun when you take it from my cold, dead hands.”

While Sarandon, Heston, and others invoke the past in political debates over gun control, judges and legal scholars also use history to try and determine what sorts of laws are compatible with the Second Amendment’s protection for the right to keep and bear arms. No constitutional right is absolute, not even the right to free speech, since courts have upheld restrictions on pornography and “fighting words.” The debate over the Second Amendment pits supporters of an individual right to gun ownership against those who believe the Bill of Rights only protects the right of the people to maintain a well-regulated militia. Apart from a few Second Amendment absolutists, most supporters of the individual rights view believe that some restrictions on gun ownership are allowable. But such restrictions must meet a very high standard of constitutional scrutiny. In essence, to be legal a gun law must be narrowly tailored and it must be designed to accomplish a compelling state interest to avoid running afoul of the Second Amendment.

The second view, the collective rights interpretation, argues that the Bill of Rights provides no protection for an individual right to own guns. Such a right might exist under particular state constitutions, but the Second Amendment is about the militia and nothing else. Until quite recently judges and the authors of the casebooks used to train law students accepted the collective rights reading of United States v. Miller (1939). In that case the U.S. Supreme Court held that “in the absence of any evidence tending to show that possession or use of a ‘shotgun having a barrel of less than eighteen inches in length’ at this time has some reasonable relationship to the preservation or efficiency of a well regulated militia, we cannot say that the Second Amendment guarantees the right to keep and bear such an instrument.” The consensus built around Miller has come under fire on several fronts. Some legal scholars argue that if one followed Miller’s logic there would be no constitutional right to own a hunting rifle, while military assault weapons would enjoy constitutional protection. Still others argue that in Miller the justices simply misread history and ignored the existence of a well established individual right to own guns.

A new test case now working its way through the federal court system may change things entirely. The facts of the case are straightforward. Dr. Timothy Joe Emerson, a physician who had fallen on hard times, threatened his estranged wife’s hairdresser boyfriend. Emerson’s wife obtained a restraining order against her husband. When Emerson’s wife went to his medical office, Emerson pulled out a 9 millimeter Berretta pistol and ordered his wife and four old daughter to get off his property. Emerson was indicted under a federal statute that prohibits individuals under domestic violence restraining orders from being in possession of a weapon. At the time of his arrest Emerson had two 9 millimeter pistols, a military issue semiautomatic M1 carbine, a semiautomatic SKS assault rifle with a bayonet, and a semiautomatic M14. When Emerson’s case came before Samuel Cummings, a Texas Federal Court judge, Emerson’s court-appointed public defender argued that his client’s Second Amendment rights had been violated. Judge Cummings agreed with the public defender and based his decision on recent legal scholarship on the Second Amendment that supports an individual rights interpretation of the Amendment. If Emerson v. U.S. (1999) comes before the Supreme Court, it is possible that the Court might reject the previous finding of the Miller case entirely or reaffirm the collective rights view.

How Historians and Legal Scholars Interpret the Past

Tench Coxe’s “Remarks” on the Bill of Rights

Perhaps the best way to illustrate the difference between law office history and the kind of history practiced by professional historians is to examine how the same source would be interpreted by both groups. Many legal scholars have interpreted Tench Coxe’s “Remarks on the First Part of the Amendments to the Federal Constitution” (published under the pen name “A Pennsylvanian” in the Philadelphia Federal Gazette, June 18, 1789) to support the individual rights view of the Second Amendment. But analyzing Coxe’s “Remarks” in their historical context raises significant challenges to the idea that they support an individual rights interpretation of the Second Amendment.

In June, 1789, when Coxe published his “Remarks,” members of Congress were drafting a series of twelve amendments to the Constitution (which had been ratified in late 1788). Ten of these were ratified by the states and have become known as the Bill of Rights. Most of the provisions of the Bill of Rights protected individual liberties and were added to the Constitution to alleviate popular fears about a strong, centralized federal government. Some provisions of the Bill of Rights affirmed the rights of the states or the people in their collective capacity. Coxe was a prominent Federalist and had written several essays in defense of the Constitution as part of the spirited debates that had taken place in the press while it was being drafted and ratified.

Lawyer Stephen Halbrook, a leading modern spokesperson for individual rights legal theorists, describes Coxe’s “Remarks” as “the most complete exposition of the Bill of Rights to be published during its ratification period.” Coxe himself described his essay in rather different terms. “I have,” he wrote James Madison, “taken an hour from my present Engagements, which on account of my absence are greater than usual, and have thrown together a few remarks upon the first part of the Resolutions.” Halbrook may be technically correct that Coxe did comment on all of the proposed amendments before Congress, but one wonders how much weight to attribute to a hastily written essay.

To support his claim that Coxe’s view of the Second Amendment captures the intent of those who framed and ratified it, Halbrook claims that “Coxe’s defense of the amendments was widely reprinted. A search of the literature of the time reveals that no writer disputed or contradicted Coxe’s analysis.” Actually, Coxe’s essay appeared three times. In 1790 there were 84 newspapers in America, which means that Coxe’s essay was ignored by more than 95% of the press. It is hard to see how this sort of evidence could prove that Coxe’s essay was representative of widely held views or that it reached a particularly wide audience. Nor can one infer much from the fact that no one bothered to refute Coxe. The absence of a rebuttal might just as easily signify indifference as acceptance. The most reasonable conclusion to draw is that Coxe’s essay was simply not very influential.

Another gun rights scholar, Don Kates, asserts that Coxe’s essay was “authoritative—by virtue of having received Madison’s imprimatur.” This view was endorsed by another individual rights legal scholar, Glenn Harlan Reynolds, who wrote that “James Madison approved of Coxe’s construction of the Second Amendment in a letter to Coxe dated June 24, 1789.” But Madison never specifically commented on Coxe’s discussion of the Second Amendment. As historian Jack Rakove notes, “Madison did not discuss the substance or merits of Coxe’s interpretation of particular rights.” What Madison did do was praise Coxe for defending the Bill of Rights in print, a move which Madison felt would have “a healing tendency.”

But what exactly did Coxe have to say about the Second Amendment in his “Remarks”? Here is what Coxe wrote:

As civil rulers, not having their duty to the people duly before them, may attempt to tyrannize, and as the military forces which must be occasionally raised to defend our country, might pervert their power to the injury of their fellow-citizens, the people are confirmed by the next article in their right to keep and bear their private arms.

Supporters of the individual rights view have focused on the fact that Coxe asserted that “the people are confirmed by the next article in their right to keep and bear their private arms.” While at first glance this would seem to provide proof of an individual right, it is not clear in what capacity the people’s private arms are protected. Are they protected as private citizens or are they protected because as militiamen citizens were expected to provide their own weapons for militia duty? Coxe’s statement ultimately tells us little about how people understood the individual or collective nature of the right to keep and bear arms in the late-eighteenth century.

Political and legal debates over the meaning of the Second Amendment will continue at rallies, in legislative halls, in the media, and in courtrooms throughout the United States. And all such debates will continue to rely on conflicting understandings of the past. Although the new individual rights scholarship on the Second Amendment has attracted some support among legal scholars, historians have uncovered serious errors of fact and interpretation in this body of scholarship. With more rigorous historical research it is possible that the balance may shift to the individual rights view. For the moment, however, the claim that the Second Amendment was originally understood to protect an individual right to gun ownership remains historically unproven and politically contested.