Images of Native Americans
http://bancroft.berkeley.edu/Exhibits/nativeamericans/index.html
Created and maintained by the Bancroft Library at the University of California, Berkeley.
Reviewed April 8, 2003.

Images of Native Americans is an exhibition created on the occasion of the Bancroft Library’s acquisition of its nine millionth volume, James Otto Lewis’s The Aboriginal Port Folio (1836), which was the first book illustrated with color plate images of Native Americans published in the United States. The Web site offers an exceptional introduction to this artist’s work and its relationship to subsequent scientific and popular representations of American Indians. While there are several exceptional print and online studies devoted to aspects of the materials presented here, the library has found wonderful and idiosyncratic examples in its rich collection of books and manuscripts. 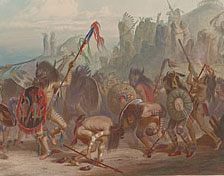 The exhibition is organized into four “galleries”: Color Plate Books, Foreign Views, Mass Market Appeal, and Early Ethnography. While the usual suspects could not be left out—George Catlin, Edward S. Curtis, and the Crockett Almanac are all here—the site incorporates numerous lesser-known works, ranging from those by the early nineteenth-century Russian artist-explorer Louis Choris to the use of Indian characters in the under-ground comics of the 1960s. Mass Market Appeal has the largest number of treasures, including a Frank Hamilton Cushing pamphlet supporting “Indian” patent medicine and a stunning art deco illustration of a captivity narrative. A separate section on The Aboriginal Port Folio within the Color Plate Books section features an engaging essay by the curator Anthony Bliss describing the adventure of acquiring the volume in a New York auction and an interesting explanation of the book’s conservation by Gillian Boal and Nancy Harris.

This exhibition was initially presented in the Bancroft’s galleries. In the shift from a three-dimensional space to a virtual one, the curators have added several enhancements. Quite elegant and useful is a timeline that puts all of the objects in chronological order and thus allows the viewer to trace trends in the representation of Indian people across different categories. Also handy are the links that bring up transcriptions of the texts that accompanied the pictures—handwritten or printed texts that might otherwise have been overlooked. The ability to bring text and image together is frequently a goal of library exhibitions, but a real engagement of these two systems of description requires an investment of time that runs counter to the way in which people move through gallery spaces. The Web site, which can be viewed at length or during several brief visits, allows for a more extended engagement with the works shown. On the downside, the nonvirtual origins of the exhibition may account for a somewhat brittle design that does not take full advantage of the Web’s capabilities. The limited mobility between different sections and the large number of links that do not work can be frustrating.

More problematic is the site’s reluctance to engage in the ideological function of the images it displays. While there are many historically significant and aesthetically fulfilling ways to engage representations of Native Americans, it is important for Web sites made available to the general public to emphasize that we are looking at visual materials that have had an ongoing effect on Indian peoples' lives. This site offers an informed viewer some wonderful new material, but an educator working with less advanced students will need to supplement the information provided here.