Thomas Edison’s film and sound ventures shaped American experience of cultural and technological change in the late nineteenth and early twentieth centuries. Inventing Entertainment provides ample primary materials on listening and spectatorship in that era. The 341 Edison films date from 1891, when Edison began his camera tests, to 1918, when his film production company folded. Although Edison began recording sound in 1877, the collection presents only eighty-one disc recordings made from 1913 to 1922. A few accompanying materials include advertisements, posters, and original magazine articles. Visitors can search the collection or browse by genre and chronology. 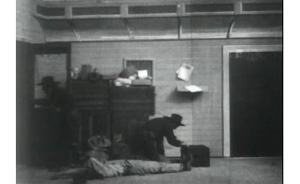 The film section is extensive and sufficiently contextualized for lay audiences. Because copyright law did not cover motion pictures until 1912, early film producers sent segments of their motion pictures as paper prints to the U.S. Copyright Office at the Library of Congress. Edison provided frame-by-frame renditions of entire works, here transferred to digital video. The genres of film include actualitiesshort films of celebrities, news, disasters, work, travel, technology, scenic views, and expositionsas well as pioneering comedies, animation, trick films, reenactments, advertisements, and dramas. One innovative drama, The Great Train Robbery (1903), directed by Edwin S. Porter, features a famous sequence of a bandit shooting straight into the camera. Viewers can compare the Spanish-American War actualities Wreck of the Battleship “Maine” (1898) and Colored Troops Disembarking (1898) with after-the-fact reenactments of the war’s events, such as Advance of Kansas Volunteers at Caloocan, filmed in 1899 in New Jersey with National Guard troops standing in for the volunteers. Accompanying essays link the films to early U.S. film history as well as to Edison’s life, inventions, and business.

Visitors to the sound section need more background on the history of sound than is available in the Web site’s technical essays on the development of cylinder and disc recordings. This section includes instrumental selections, vocal numbers, speeches, comedy skits, ethnic recordings, classical performances, and religious recordings. Some Edison artists would become well known, such as the Russian composer Sergei Rachmaninoff and the black composer and vocalist Noble Sissle. Informed visitors can use recordings to discover how the phonograph transformed the standards of musical performance, a point made by Edison in his 1917 article included on the site, “New Aspects on the Art of Music.” They can also ponder the roots of the “significant opposition” Edison’s phonograph encountered from stenographers. Contrary to Edison’s 1910 advertising film The Stenographer’s Friend, dictating machines hardly improved work conditions for women clerical workers in this period.

Incorporating more recent scholarship on sound technologies would make such implied connections explicit. The content and technical presentation also could be updated. The introduction promises that cylinder sound recordings will be added “in the near future,” yet none have been added since the site’s launch in 1999. The film clips are tiny by contemporary standardsthey were created with the then “typical 28.8 internet [dial-up] connection” in mind. Still, the site provides unique resources on American cultural and political history, the development of cinema, and the interplay between film and sound technologies.