This Web site does one thing, and it does it well. It makes accessible transcripts of more than 230 interviews conducted with Rutgers alumni since 1994, when the class of 1942 provided funds and interviewees for an archive to preserve the history of the war generation at Rutgers. Since then other alumni—mostly white men who graduated in the 1940s—have added their stories, building a collection of lengthy personal narratives (often running twenty thousand words or more) that cover the period from the Great Depression to the Cold War. Rather than focusing on a particular theme or event, interviewers asked alumni to tell their life stories, beginning with brief sketches of family history and childhood upbringing, then focusing on the personal odysseys of the war years, and concluding with a discussion of postwar life under the G.I. Bill. 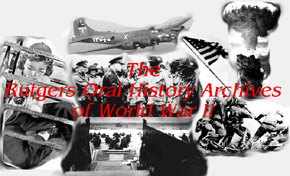 Because of its overriding concern with making transcripts available, the Oral History Archives of World War II neglects other considerations, such as Web design; indeed, the site would not be harmed, and might be improved, if the few images that dot its pages were removed. So focused is the archive on its textual resources that audio clips of the interviews are nowhere to be found, despite their (admittedly costly) value. Navigating the site can prove cumbersome, especially over a slow connection, because interviews are linked from a large finding aid organized alphabetically by name. For the visitor who shares the archives interest in identifying the details of military service, G.I. Bill benefits, college enrollment, and class year of the interviewees, the finding aid can be exceptionally helpful. Those interested in other topics will have to invest more time to find what they want. In certain places, such as the section devoted to medals of honor earned by Rutgers alumni, or the large memorial section providing the biographical details of classmates who died in the war, the archives reliance on its alumni contributors shows through and may distract some visitors from the broader historical interest of the site.

To a far greater extent, however, the archives singular focus on alumni interview transcripts is a great boon to scholar, teacher, and student alike. The depth of its offerings becomes most apparent when using the full-text Google search of the transcripts. Entering just a few terms into the search box—try “ration,” "draft,“ or the name of any ethnicity or race—quickly reveals the many interconnections between experiences, interconnections otherwise hidden from the visitor plodding through the individual listings of the finding aid. Typing mundane New Jersey place names (”Metuchen,“ "Rahway,” "Trenton“) into the search engine summons many of the same interviews located with more glamorous terms (”Pearl Harbor,“ "Iwo Jima,” "Roosevelt"), a result that attests to the unique value this collection holds for documenting a period when ordinary lives opened out onto an extraordinary world stage. The richly detailed interviews in this collection capture, as no other type of primary source can, some of the profound changes that marked life at midcentury—transitions from civilian to military, parochial to cosmopolitan, depression-era man-in-the-street to postwar college graduate and veteran of the U.S. armed forces.