The South Texas Border, 19001920: Photographs from the Robert Runyon Collection
http://memory.loc.gov/ammem/award97/txuhtml/runyhome.html
Created by the General Libraries at the University of Texas at Austin;
maintained by the libraries and the Library of Congress.
Reviewed Oct. 24, 2002.

The transformation of south Texas from a border region to a transnational site of military, economic, cultural, and political developments in the late nineteenth and early twentieth centuries has been the subject of numerous scholarly books and articles over the last decade, and this collection of over eight thousand photographs, postcards, and other visual resources documents much of that history—the Mexican Revolution, the U.S. military presence at Fort Brown and along the border, the development of commercial agriculture in the Rio Grande valley of Texas, and the growth of towns and cities along both sides of the border and in northeastern Mexico. The subjects covered in this collection are as varied as the interests of its namesake, the photographer Robert Runyon. 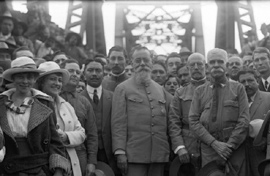 Runyon, originally from Kentucky, moved to Brownsville, Texas, in 1909, where he married Amelia Leonor Medrano Longoria from Mexico. He first established a concession at the train station and later worked as a commercial photographer from 1910 to 1926. Runyon happened to be in a border town that would make history both in the United States and in Mexico. Brownsville with its Mexican counterpart across the border, Matamoros, was the site of a decisive battle during the Mexican Revolution. Runyon took hundreds of photographs of Mexican soldiers and rebel (Constitutionalist) leaders such as Pancho Villa who were engaged in a long struggle to topple the thirty-year federal dictatorship of Porfirio Díaz. When the struggle spread from Monterrey to Matamoros on the Rio Bravo (Rio Grande) in 1913, Runyon documented the victory of the Constitutionalists over the Federals and the executions that followed. The United States responded by increasing its military presence in Fort Brown, and Runyon photographed the everyday activities of U.S. soldiers in camps and in the towns. After the revolution, Runyon gave up commercial photography but continued to photograph life in Brownsville and other border towns for decades. Although his photographs of the leaders and people involved in the tumultuous upheavals of the time—including fascinating photographs of soldaderas, or Mexican women soldiers—are justifiably the most often reproduced in books on south Texas and the Mexican Revolution, Runyon also photographed a wide range of local and regional culture, including aeronautical accidents, parades and funeral processions, weddings, missions, cotton gins, and train wrecks.

One of the interesting features of this site is the special presentation, “The Mexican Revolution: Conflict in Matamoros,” which showcases nine photographs, among them images of Mexican refugees fleeing to the U.S. side of the border, the barricades erected in the city, Federal soldiers garrisoned at Matamoros, the triumphant entry of the Constitutionalists toward the main plaza, and the execution of Antonio Echazaretta, a twenty-three-year-old volunteer defender of the city who held the rank of colonel. Each photograph is accompanied by a brief description to provide historical context. Multiple links to other sites provide additional historical information and context for the photographs.

A printed finding aide to the collection, published in 1992, organizes the collection into five series: the United States Military; the Lower Rio Grande Valley; the Mexican Revolution; Portraits; and other United States views. This aid, with links to individual images and detailed prose descriptions, will be made available “in the future.” In the current format the photographs are arranged by subject and can also be accessed by keyword search. The site gets high marks for its organization and navigability, and historians and others interested in the complex history of south Texas and the Mexican Revolution will find this award-winning site easy both to read and to navigate.