American Life Histories: Manuscripts from the Federal Writers' Project was among the first of the digital collections to debut on the Library of Congress’s American Memory site. These manuscripts were written between 1936 and 1940 by the staff of the Folklore Project of the Federal Writers' Project of the Works Progress Administration (WPA), who gathered life stories and living folklore, collected folktales, recollections, songs, sayings, and the like, and recorded ethnic, regional, and occupational folklore and customs. 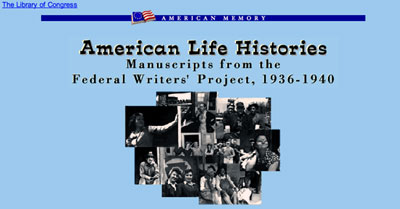 The 2,900 manuscripts in the American Life Histories collection are the combined efforts of 300 writers from 24 states. Texas and New York City have the lion’s share of documents, which include carefully crafted narratives, seemingly verbatim interviews or snatches of overheard conversations, perfunctory biographical sketches, and unorganized lists. In addition to the documents themselves, the American Life Histories site includes some contextual information and an introduction by Ann Banks, adapted from her book First Person America (1980).

Each manuscript is presented in three formats: as Web-friendly HTML (hypertext markup language) files, as image files, and as SGML (standard generalized markup language) files requiring a special plug-in. Documents are organized by state and can be searched via a search engine. State indexes contain a summary of the topics treated and project workers employed in each state. It is a fine thing to see this material publicly accessible; more important, though, digitization has transformed this archive into a searchable database that facilitates a quick, topically related inspection of a documentary collection and influences the very questions we might think to put to a collection. For example, a quick keyword search found 20 documents containing the word collards, 88 documents containing the word baseball, and 469 documents containing the word love.

That said, there are drawbacks to this particular database. Because results are generated by a search engine, it is next to impossible to bookmark or save URLs (uniform resource locators) for future reference—a problem for those who might wish to use specific documents in a more focused classroom exercise. Nor is there any consistent citation scheme that might fix the digital document to its counterpart in the physical archive. (The truly adventurous can locate “real” URLs to the life histories documents by slogging through the WPALH directories at http://lcweb2.loc.gov/mss/.)

Editorial changes made by staff members in the Folklore Project are designated by bracketed notes indicating deleted material and handwritten revisions. Consequently, a heavily edited passage can quickly become impassable, choked by a thicket of brackets, its ugliness unrelieved by the Web site’s ubiquitous robin’s-egg blue background color. While the library’s reluctance to make editorial changes to the original documents is understandable, a more reader-friendly solution might have utilized strikethroughs and italics.

Unlike more recent American Memory projects, little acknowledgment or recognition is given to the project leaders, staff members, and consultants who developed American Life Histories. Special credit is due to the anonymous scribes who transformed these typescript documents into electronic text, an undertaking that, in terms of ambition and tedium, rivals the cataloging and microfilming projects of the WPA.