Touring Turn-of-the-Century America presents the extensive and at times overwhelming digital archive of photographic images from the collection of the Detroit Publishing Company, a photographic publishing firm, which produced and sold postcards, photographic prints, lantern slides, and photo albums in the United States from 1895 to 1924. The more than twenty-five thousand digitized images present a comprehensive view of popular sites and scenes from across the United States and around the world. Ranging from scenic views to cityscapes, from historic landmarks to popular resorts and amusements, views of businesses, colleges and universities, and churches, and reproductions of popular paintings, the collection portrays an idealized view of turn-of-the-century America—a perspective that reflects the Detroit Publishing Company’s business of making and selling tourist images, commercial scenes, and booster views.

The site offers a fascinating source for scholars interested in how mainstream, middle-class Americans imagined the United States and other places around the world at the turn of the century. The people and places documented in these commercial photographs depict the heroes and highlight as well the stereotypes and prejudices of the period. They present an overarching portrait of the values that shaped and defined the United States in the early decades of the twentieth century. Easy navigation and clearly reproduced images accessible for downloading and printing make this site a valuable resource for primary visual materials of the period. 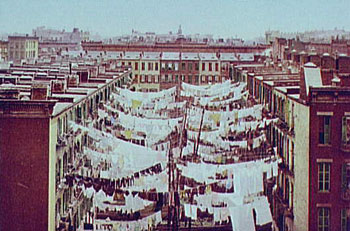 These commercial images even transform
New York City tenements into an alluring view.

The site is also significant for its wide-ranging compilation of photographs by the noted landscape photographer William Henry Jackson. Jackson joined the Detroit Publishing Company as a partner in 1897; in the process the company acquired his personal negatives, including images taken while Jackson was working for Francis V. Hayden’s Geological and Geographic Survey of the Territories, the Mexican Central Railroad, the Baltimore and Ohio Railroad, and the World’s Transportation Commission. Overall, more than two thousand Jackson photographs are reproduced on the site. Although Jackson is the most prominent photographer whose work is made available, the site also contains the work of other commercial photographers from the period, including Henry G. Peabody, E. L. Schreck, and John S. Johnston, among others.

Since this site is predominantly a visual archive, interpretive and historical analysis is not central to the content and organization. There is little guidance beyond brief historical overviews and a selected bibliography accessible from the home page for users unfamiliar with the history of the period. For example, there is little context or explanation as to why a keyword search for African American brings up in the list some stereotypical images with such titles as “Watermelon Jim” or “A Darky Homestead.” The site does provide a short inter-pretative section titled the Collection Connector, however, which includes sample exercises and assignments related to historical analysis, critical thinking, and visual interpretation.

This online digital archive provides a rich array of photographic images that will prove most useful to scholars seeking specific visual illustrations of public culture in the early twentieth century. A more detailed introduction on the home page about the history of the Detroit Publishing Company, explaining how and why the images were made, who they were made for, and how they were used, would assist all users in assessing the larger historical and cultural implications of the collection.