The Evolution of the Conservation Movement, 1850–1920,
http://lcweb2.loc.gov/ammem/amrvhtml/conshome.html
Created and maintained by the Library of Congress.
Reviewed May-June 2009.

This astonishingly rich web-based archive captures some of the central issues shaping the American conservation movement from the mid-nineteenth to the early twentieth centuries. Expansive, like its subject, the Web site draws on the voluminous records at the Library of Congress (LOC), linking readers to “62 books and pamphlets, 140 Federal statutes and Congressional resolutions, 34 additional legislative documents, excerpts from the Congressional Globe and the Congressional Record, 360 Presidential proclamations, 170 prints and photographs, 2 historic manuscripts, and 2 motion pictures.” This multimedia array of primary sources and the accompanying “critical thinking” exercises provide a wide-angle perspective on the federal government’s commitment to conservation and what the site editor Jurretta Jordan Heckscher calls the “generative cultural milieu” that nurtured the conservationist ethos. 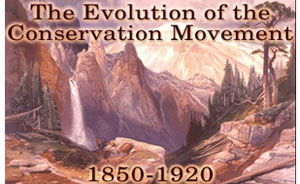 First, some caveats: for all of its range, The Evolution of the Conservation Movement does not include key data in the LOC archives. As Heckscher notes, missing are President Theodore Roosevelt’s executive orders that established so many national forests, parks, and refuges. Also absent are relevant newspaper accounts and periodical literature as well as the library’s illuminating “corpus of political cartoons on conservation.” There are also some technical concerns. Although the site is relatively easy to navigate, it is not always easy to read; with small text running the full width of the screen, users will strain their eyes to see the words and absorb their meaning. The site’s individual page layouts are not as user-friendly or graphically compelling as contemporary Web designs can (and should) be.

Still, the site is a “storehouse of plenty” and will amply reward those students, teachers, and scholars who dig into it in search of documentary evidence for why, in the midst of the Industrial Revolution, Americans from all walks of life began to argue for the conservation of natural resources, preservation of scenic landscapes, and protection of wildlife habitats.

One of those vital figures is George Perkins Marsh, whose 1847 address to the Rutland County (Vermont) Agriculture Society is the site’s first text. In it, Marsh laid down a central idea, which, twenty years later, would animate his Man and Nature (1864) and is often credited as the intellectual basis for conservationism: “social man repays to the earth all that he reaps from her bosom.”

Also cultivating the more harmonious relationship with nature that Marsh thought essential was a host of painters and lithographers who fanned out across the continent to depict the nation’s majestic form and moral import. Other contributors were writers such as Mabel Osgood Wright (Citizen Bird, 1897), Mary Austin (Land of Little Rain, 1903), and John Muir (“Let Everyone Help to Save the Famous Hetch Hetchy Valley,” 1909). The interplay of these cultural agents and arguments (and subsequent political activism) are reflected in the long train of legislative initiatives and presidential proclamations, culminating with the enactment of the 1920 Federal Water Power Act, the site’s last document. Conservation, this fascinating repository reveals, was a driving force behind the creation of the modern, regulatory nation-state.