History and Politics Out Loud (HPOL) presents 107 spoken word recordings of people in twentieth-century United States history, as “a searchable archive of politically significant audio materials for scholars, teachers and students.” Each of the 107 selections available for streaming is indexed by date, title, subject, and, when a transcript exists, by keyword in the transcript. 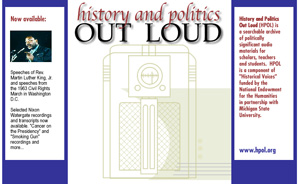 HPOL has been available online for several years, yet its content and presentation give the impression that it is still being developed. The browse-by-date screen of HPOL provides a breakdown by decade of the site’s offerings. An examination of the site using this display demonstrates the site’s significant strengthsand weaknesses. The decade outline shows no entries before the 1930s, which is represented by three recordings, one by Oliver Wendell Holmes and two by President Franklin D. Roosevelt.

The four recordings of the 1940s are outstanding examples of political rhetoric concerning crucial issues of the decade: President Roosevelt’s declaration of war, his “Fala” speech of the 1944 presidential campaign, Winston Churchill’s 1946 “Sinews of Peace” address at Westminster College, and the 1947 address by Secretary of State George Marshall in which the Marshall Plan was introduced.

The selection of material becomes more eccentric after the 1940s. Inexplicably, there are no recordings at all from the 1950s or the 1980s, and the 1970s are represented only by 34 discussions between President Richard M. Nixon and his aides about the Watergate scandal. Most odd is the sole HPOL recording of the 1990s, a 1993 denial by President Bill Clinton of sexual involvement with Paula Jones.

The Clinton Paula Jones clip represents a number of limitations in the presentation. Subject cataloging of the site’s recordings is inconsistent and sometimes inaccurate. The Clinton Paula Jones clip’s subject terms include “Lewinsky, Monica,” even though it dates from years before the events that led to the president’s impeachment. The Clinton recording is accompanied by an unsigned essay called “The Power of Words: Written and Spoken.” It is intended to provide some context for the clip and suggest classroom use of the clip to evaluate print journalists' presentation of controversial events, but is not very successful in doing so. Simple contextual explanations for each selection and full transcripts would be very useful. Only some entries on the site include them. The Clinton recording is only twenty-five seconds long. Most selections on the site are complete recordings, but their respective lengths are not displayed in the cataloging.

A strength of the site is its 62 recordings from the 1960s. Sixteen are of President John F. Kennedy and his aides dealing with the Cuban missile crisis; 5 are speeches recorded at the August 28, 1963, march on Washington. Other recordings from the sixties include 9 conversations of President Lyndon B. Johnson formulating the Warren Commission to investigate the assassination of President Kennedy, part of an oral history with Justice William O. Douglas, and a series of 1964 Vietnam Warrelated telephone conversations by President Johnson. With this decade HPOL most successfully presents aural history: public and private recordings representing the formulation of policies and public addresses to an array of constituencies. More thorough and consistent presentations, as well as more recordings, will make this site an invaluable resource for primary source audio.