Documenting the American South (DAS) is a rich archive of sources on southern history, literature, and culture from the colonial period (so we are told) through the early twentieth century. Numerous recollections, images, broadsides, and musical lyrics evoke the southern perspective on the worlds of the Old and New South. The various texts are well chosen to amplify the often muted voices of the past. DAS consists of five projects: “First-Person Narratives of the American South”; “Library of Southern Literature”; “North American Slave Narratives” (these are printed narratives of former slaves, not the Federal Writers' Project collection); “The Southern Homefront, 1861–1865”; and “The Church in the Southern Black Community.” Each section includes an explanatory introduction with substantial redundancy of text. In the planning stage is an addition that will feature “North Caroliniana.” DAS includes 971 books and manuscripts. 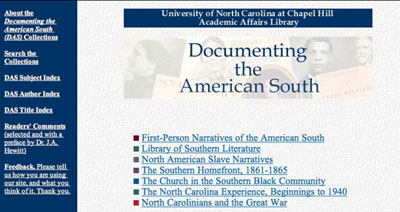 The archive also contains a thousand images of currency, manuscript letters, maps, broadsides, title pages, illustrations, and photographs. Full citations of all entries are included in bibliographies arranged chronologically and alphabetically. Thematically, the site focuses upon slavery, civil war, and African American religion. Scholars guided by an Editorial Board for Documenting the American South have selected the texts from the premier southern collections in the library at the University of North Carolina at Chapel Hill. The Institute of Museum and Library Services, the National Endowment for the Humanities, the Gladys Krieble Delmas Foundation, and the Library of Congress/Ameritech National Digital Library have funded the various projects of the archive.

Chronologically, the nineteenth century gets the most attention. Except for John Lawson’s 1709 travel narrative on North Carolina, for example, no earlier work in southern literature is included. Instead, the introduction includes a reprint of “Literature in the American South” from the Encyclopedia of Southern Culture, where ironically the editors Charles Reagon Wilson and William Ferris make the case for the importance of seventeenth- and eighteenth-century literature.

The Civil War looms large both on the site in general and in firsthand accounts, occupying at least 45 percent of all narratives (65 out of 145). Although texts extend to 1920, there is nothing beyond 1920, in part to avoid difficulties with copyright. DAS is primarily concerned with the “inaccessible” voices of southern history and life: women, Native and African Americans, laborers, enlisted men, and others at the bottom of the social heap. The religious South is confined to the black church. The archive is becoming increasingly dated, however, as recent scholarship such as that of Philip Morgan, Ira Berlin, George Fredrickson, Kathleen Brown, James Horn, Karen Kupperman, Lorena Walsh, Jack Greene, Roger Ekirch, Timothy Breen, Edmund Morgan, Mechal Sobel, and others reveals that the formation of southern culture and identity might be better understood in a global context that took shape long before the nineteenth century and the American Civil War.

Navigation through the site is by A-to-Z indexing of authors' surnames. Clicking on a particular source brings up a title page and subject index that reveals related titles in the database on that subject. Each source is delivered as a full-text file in hypertext markup language (HTML) for Web display and a standard generalized markup language (SGML) version with search and browse features. DAS recommends two SGML browsers that users might select for viewing. Unfortunately, Multidoc Pro has been terminated, and Panorama, an e-business company, gives no information on how to obtain an SGML viewer plug-in.

Teachers in schools, colleges, and universities will appreciate the convenience of having rare texts so readily available for use in the classroom, although they will have to look elsewhere for student aids on how to evaluate primary sources. To make this a first-rate site on the American South, however, will require a broadening of the textual database, review of all introductory text to eliminate redundancies, and a commitment to make the database truly searchable via an SGML browser, preferably one that resides on the server and does not require users to locate their own. An e-text reader would also give users greater flexibility and might increase the public audience. In its present iteration, those who teach will find it a mini-Library of Congress on nineteenth-century southern history and culture.