Law school professors have long been in a state of suspended animation when it comes to information technology. Some have awakened from their slumber; others remain in a coma, perhaps never to gain network consciousness. Professor Doug Linder is an exception to this general rule. His engaging web creation, Famous Trials, is an amalgam of primary documents and narrative essays serving his pedagogical objectives, but the material clearly has wide appeal. 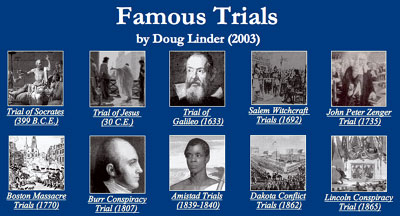 Linder has selected twenty-one trials for detailed study. Nearly all are rooted in the American legal experience. (The two exceptions are the Nuremberg trials following World War II and the Oscar Wilde trials at the end of the nineteenth century.)

The trials cover a wide range of criminal conduct. (Andrew Johnson’s impeachment trial—lacking criminal penalties—is the exception.) The narrative essays ground readers in Linder’s understanding of each trial. To his credit, Linder has provided ample primary evidence to support his interpretation, enabling others to verify and, perhaps, challenge his view.

The trials are organized in similar fashion; each has an emblematic image or photograph as the central feature and a set of links to primary sources, images, opinions, maps, testimony, and secondary materials. He has thoughtfully included bibliographies for additional research.

Linder is considering an expansion to include five famous trials (ranging from the 339 B.C. trial of Socrates to the 1993 trial over the beating of Rodney King). The list reflects Linder’s interests, as there is no effort to explain what accounts for fame. He might well consider the Alger Hiss trial and the Clinton impeachment. Both trials capture important events in American political history and surely fit within the contours established by the current list.

Linder has done us a great service by assembling these materials and providing navigation between the narrative and the sources on which he has relied. Though Linder makes clear that he has used materials in the public domain or that are now out of copyright, it may prove still more helpful to provide some succinct sources for them. For example, Linder frequently relies on edited trial transcripts. By providing footprints to his sources (archives, libraries, courthouses), he would enable others to test his editorial judgment.

In many circumstances, Linder has gone to the trouble of transcribing materials that do not exist in digital format (for example, early newspaper articles). To provide a flavor for the original document, Linder might consider adding a PDF (portable document format) version of the newspaper itself so as to reveal placement on the page (above or below the fold, left or right) and the layout of the article. Higher scans of the very useful maps (again, PDF is a useful format) would enable users actually to appreciate the details.

As this site grows, and one hopes it does, Linder should consider a consistent visible navigation scheme, a reduction in the text area for easier reading, a print-format option, and additional common design elements (fonts and color palette). The trials now appear in no particular order (neither alphabetic nor chronological) on a scrolling home page. Linder may have reached the point where the success of this worthy project will encourage him to contemplate how to make his wonderful trove even more useful to a wide and appreciative audience.