Although this Web site delivers something less than its sweeping title suggests, it nevertheless offers a notable collection of images. The site assembles approximately 4,500 photographs documenting the field excursions of University of Chicago ecologists, including Henry C. Cowles and George D. Fuller, between 1891 and 1936. A majority of the images, which have been digitized from originals owned by the University of Chicago Library’s Department of Special Collections, reflect nearly half a century of faculty-led field trips and field classwork across forty-three states. Also included are more than two hundred images taken during the International Phytogeographic Excursion of 1913, on which Cowles escorted a group of European botanists and botanical ecologists on a cross-country tour of ecologically notable locations, including the Indiana Dunes, where Cowles conducted the field research for his pathbreaking theory of dynamic vegetational succession. A useful timeline and an interpretive essay, “Ecology and the American Environment,” supplement the images, providing context for the significance of Cowles and his work, the University of Chicago Botany Department, the International Phytogeographic Excursion, and the development of ecological ideas during the period covered by the collection. 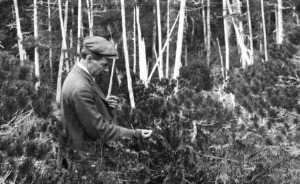 In addition to its straightforward keyword searchability, the site allows browsing by subject heading, place, and state. Users can view search results as a list or in a twenty-image gallery of thumbnails; the latter significantly eases the process of identifying useful images. The searchability and the usefulness of the images, however, are somewhat constrained by the uneven quality and depth of information attached to each image. Some images, for example, such as “[An] Ulmus americana with excrescences on [its] trunk, Smith Indiana,” include site information, provide the scientific and common names of the plants pictured, and identify the features that captured the photographer’s attention. Others, such as “Desert [plants in] Arizona,” provide very little.

As a result, the usefulness of the images will depend on the user’s purposes. For most of the images, insufficient information and interpretation will make it difficult for anyone not trained in botanical ecology to appreciate the significance of the plants and ecosystems captured in the images. On the other hand, for researchers with the necessary training, or for those who are interested in the history of the University of Chicago’s field ecology classes, the pictures represent a potential treasure trove of information. Perhaps the main usefulness will be for those looking for a bank of photos to illustrate lectures with environmental themes, since the collection includes images of a rich, geographically diverse, and easily searchable range of ecological settings. In addition, substantial portions of the collection focus on “disrupted” environments — the home page, for example, contains links to the keywords erosion, floods, irrigation, and lumbering. Additional large numbers of images capture the ecologists themselves conducting their fieldwork, along with shots of field class members and their field camps, making them potentially attractive to historians of science.