Scholars of the nineteenth-century American West have long known and appreciated the photographs of Solomon D. Butcher; his images of homesteaders on central Nebraska’s plains make visible the hardships and aspirations of families such as those in Willa Cather’s novels. Butcher published two books during his lifetime (Pioneer History of Cusker County and Short Sketches of Early Days in Nebraska [1901] and Sod Houses, or, the Development of the Great American Plains: A Pictorial History of the Men and Means That Have Developed This Country [1904]), but he amassed a much larger archive of images that was eventually acquired by the Nebraska State Historical Society. Those images—more than three thousand taken between 1886 and 1912—were annotated by Butcher and form the core of this archive.

Prairie Settlement integrates the digitized Butcher photographs with the extensive correspondence of the Oblinger family, whose patriarch, Uriah, left Indiana in the 1860s and settled in Nebraska in 1872. Over the course of 318 letters, Oblinger looks for land, marries, has children, loses his wife in childbirth, makes and loses a homestead claim, remarries, fathers additional children, and tries to support his six daughters through the vicissitudes of grasshoppers, economic depressions, ill health, and bad luck. The Oblinger correspondence—including letters from Uriah, his wives, offspring, and assorted in-laws—begins in 1862 and is concentrated in the remaining decades of the nineteenth century, with the last letter dated from 1911. Letters and envelopes from the Oblinger family papers have been digitized, transcribed, indexed, and combined with the Butcher photographs to “illustrate the story of settlement on the Great Plains.” 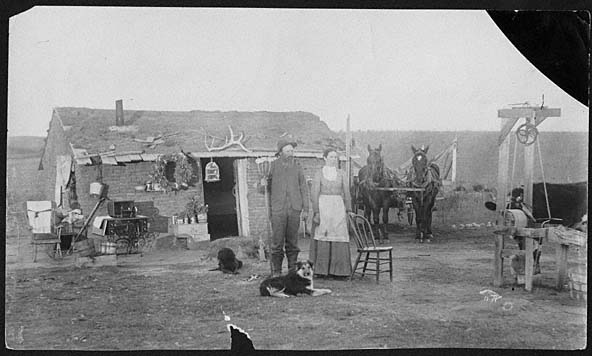 Both collections are rich resources in their own right and can be mined for insights that extend beyond the rubric of “settlement.” While Butcher’s images concentrate on the now-iconic depictions of households (along with their animals and possessions) proudly arrayed in front of their sod homes, his photographs also show other less familiar subjects, including cowboys playing poker, the Nebraska Industrial Arts Building, and unusual landscape formations. On the Web site, Butcher’s images—both swiftly loading thumbnails and larger reference photos—are fully cataloged and indexed by subject, though not as comprehensively as a material culture historian might hope. The Oblinger letters, at their best, reveal the daily challenges, celebrations, and concerns faced by those families whom Butcher depicts only at a single instant. The combination of the two collections in the Prairie Settlement site results from a 1990s Library of Congress initiative to support the digitization of nationally important primary resources from other institutions. Scholars and teachers can now benefit from the availability and searchability of Butcher’s photographs and, with slightly more effort, can supplement them with salient quotations from the Oblinger saga.

This is, however, very much a first-generation digital project. Researchers accustomed to the functionality of more recent and sophisticated textual search tools will be chagrined to find that the Oblinger letters are indexed only to document level. Searching for “women suffrage,” for example, will take the user only to a long letter rather than to the relevant passage within it. Looking for “furniture” in the Butcher photographs produces only one reference, although many other images contain household objects. The site could have benefitted from Nebraska maps to help users place the various locations mentioned in the letters and depicted in the photographs. In particular, the decision to honor the spacing and punctuation idiosyncrasies of the Oblinger letter writers (though silently correcting some spelling) means that these transcriptions can be daunting to read, particularly for students. While scholars will appreciate the careful editorial notes provided by the historical society staff members who digitized both collections, they may also lament the project’s relatively crude navigational tools. Users of this archive will rely heavily on the site’s “back” buttons to access material. Patience in the pursuit of information can be richly rewarded, however. Perusing the letter that referred to woman’s suffrage yielded the following, in a letter from Giles Thomas, dated September 24, 1882: “Well yes—we had the pleasure of hearin Miss Susan B. Anthony deliver a discourse on woman Suf {Begin deleted text} a {End deleted text} rage on last day of fair There is quite an excitement in our State on the question of Woman Sufrage at the present time—the question will be brought before the people this fall to decide by vote whether woman shall have the privalage to cast their vote. So far as I am concerened I want my wife to have the same privalage I have in all respects.”

Frustrations and pleasures await the patient user of Prairie Settlement.