A new Web site created by the Office of the Historian in the U.S. Department of State covers broad ground. It contains a short history of the agency, information on various secretaries and principal officers, and histories of embassies and official buildings that the department’s personnel have occupied. This should be of value to anyone seeking general information on the Department of State. 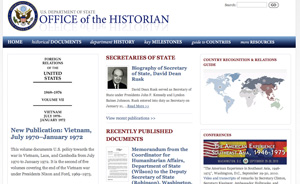 Of particular interest to scholars and students, the site’s “Countries” file contains information on how the United States has maintained relations with each of the countries it recognizes. The hyperlinks within the guide to each country can be useful. In the case of Afghanistan, a 2001 Library of Congress country study does a decent job outlining that nation’s history. Links to a State Department Background Note and Central Intelligence Agency World Fact Book entry provide current facts and figures. An up-to-date State Department country file elucidates current U.S. policy with links to North Atlantic Treaty Organization sources and speeches by U.S. officials.

At its core, the site provides access to the more than five hundred volumes of documents in the Foreign Relations of the United States series. As yet it mainly covers the Kennedy, Johnson, and Nixon-Ford eras. The volumes are organized chronologically by president, and then geographically and topically. All are easily searchable, and each contains an index with the page numbers hyperlinked to the relevant documents. The section also contains a subdivision titled “Themes” that explores a small but growing list of issues in American foreign relations: decolonization, the 1960 U-2 incident, and so on. Each theme presents a summary, a selection of key documents, and related Web resources. Hopefully, the completed site will also include Office of the Historian products that are now accessible only with difficulty on the Department of State’s main site and Freedom of Information page. Its worthy 1997 preliminary study of U.S. and Allied efforts to recover and restore stolen Holocaust assets comes immediately to mind.

A still evolving “Milestones” section needs more thought. Designed to provide context for diplomatic issues, the section is divided into eighteen periods covering the years 1750–2000. Each period describes important moments within its span of time. The short essays are nicely written but contain neither footnotes nor links to the sort of resources that give the “Countries” and “Themes” sections depth and versatility.

The need to correct those absences is particularly compelling because the site seeks to further the department’s tradition of working with the academic community. To that end, it even provides access to a growing set of free, easily downloadable curriculum materials on issues in American foreign policy geared to the needs of middle school and high school educators. These packets contain well-designed lesson plans, chronologies, glossaries, and hyperlinks to other sites. Some offer free and easy-to-order videos.

Overall, the State Department’s history site has much to commend it. Providing important resources to the nation’s teachers and scholars, it deserves to be more widely known.