The Lost Museum is a three-dimensional re-creation of the leading tourist attraction and one of the most important cultural venues of the nineteenth-century United States: P. T. Barnum’s American Museum (18411865). The project is the collaborative result of eight years (19962004) of research, interpretation, and implementation by historians, curators, librarians, artists, programmers, writers, researchers, and animators under the leadership of the executive producers Andrea Ades Vásquez, Joshua Brown, and the late Roy Rosenzweig. The Lost Museum is composed of four sections: “Who Burned Down the Museum?” allows viewers the opportunity to solve a mystery; “Explore the Museum” enables visitors to “walk” through the same four three-dimensional rooms of the American Museum without having to look for clues; “Search the Archive” provides primary documents for those wishing to explore museum exhibits and subjects in greater depth; and “Visit the Classroom” provides teaching and other learning materials, including short essays by eight leading specialists to contextualize certain parts of The Lost Museum. 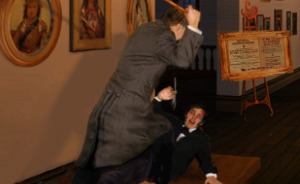 A re-creation of the caning of Charles Sumner by Preston Brooks is staged in the Waxworks Room
on the second floor of The Lost Museum. Courtesy American Social History Project, Center for Media and Learning.

“Who Burned Down the Museum?” begins with playful hokum. Indeed, this section could have been created by Barnum himself. A visual and audio re-creation of the famed impresario “talks” to the viewer, identifying five suspected arsonists. Since the setting is July 12, 1865, twelve hours before the fire, viewers may wonder: Did Barnum know who burned the museum? Did Barnum burn down his own museum? Or is this another humbug?

Visitors move through the The Lost Museum and click when passing an exhibit to read a descriptive label or learn about the subject. The eclectic smorgasbord of the American Museum is here: Jenny Lind; the conjoined Asian twins Chang and Eng; a wax re-creation of Preston Brooks caning Charles Sumner; the Fejee Mermaid; the horse skeleton of North America; Annie Swan, the Nova Scotia giantess; Tom Thumb; phrenology; Joice Heth; Native Americans; the Woolly Horse; the adventure of the Union spy Pauline Cushman; and a section on the Civil War with a “draft wheel,” a howitzer, and John Brown memorabilia. At one point, the Circassian Girl (Zalumma Agra), peeks out from behind a wall and calls for your attention. Viewers can “leave” The Lost Museum and enter the archive to explore in greater depth subjects that visitors might not immediately associate with the American Museum: the Civil War, abolition, gender relations, temperance, natural science, and racial identities. The layering of visual, spatial, documentary, and historiographical material enriches the site by providing primary and secondary sources for students in a survey class and professional historians alike. It is easy to get lost in The Lost Museum. After four hours of searching for clues on the arsonist who burned the museum, I found only eight of fifteen and was forced to retrace my steps. 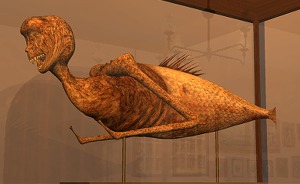 The “FeJee Mermaid” in the Picture Gallery on the second floor of The Lost Museum.
Courtesy American Social History Project, Center for Media and Learning.

The Lost Museum takes some creative license. To illustrate Barnum’s support for African American suffrage, viewers in the Lecture Room can read a speech by William M. Dickson (an informal advisor to President Abraham Lincoln) delivered not at the museum but at Oberlin College in 1865. In Barnum’s office, a “re-created” handwritten letter criticizing Barnum for cruelty to animals sits on his desk, but the Web site authors acknowledge that these “documents” reflect national debates which were prominent in museum exhibits at the time.

The Lost Museum, most significantly, forces visitors to confront difficult questions about nineteenth-century American history. The commentary on Chang and Eng, for example, emphasizes that they (not Barnum) managed their own careers as a touring curiosity and earned enough income to purchase a North Carolina plantation. Did they consider their condition and livelihood as something different than “exploited freaks”? Looking at the photograph of Chang and Eng with their wives and 18 of their 22 children, I wondered if they owned slaves. And how did they negotiate the physical sexual arrangements with their multiple wives?

The Lost Museum is a model of public history pedagogy. Like the original American Museum, it contains something for everyone.