The Atlantic Slave Trade and Slave Life in the Americas: A Visual Record
http://hitchcock.itc.virginia.edu/Slavery/index.php
Created by Jerome S. Handler and Michael L. Tuite Jr. Maintained by the Virginia Foundation for the Humanities and the Digital Media Lab at the University of Virginia Library.
Reviewed June 28, 2012.

This Web site is a vast archive of 1,280 images related to the Atlantic slave trade and slavery in the Americas. According to the creators, the collection “is envisioned as a tool and a resource that can be used by teachers, researchers, students, and the general public.” It does not seek to interpret the sources or offer extended commentary on their origins, nor does it enter into discussion of the accuracy or authenticity with which they represent any particular aspect of the slave trade or slavery. Instead, the site provides users with basic information about the titles, creators, dates, and locations of each image. The task of interpreting the images is largely left to users, although several are accompanied by fairly substantial comments on issues such as the careers of the artists who produced the images and the books from which they have been excerpted. Comments also steer users toward publications containing fuller discussion of the displayed images, which include many paintings, etchings, and sketches made during the period of slavery. Some date back to the sixteenth and seventeenth centuries, but most of the site’s material relates to the eighteenth and nineteenth centuries. There are also modern photographs of sites and artifacts. 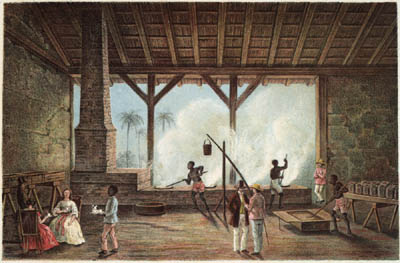 Sugar Boiling House, Cuba, ca. 1850, Image Reference Album-26, as shown on http://hitchcock.itc.virginia.edu/Slavery/index.php, compiled by Jerome Handler and Michael Tuite, and sponsored by the Virginia Foundation for the Humanities and the University of Virginia Library.

It is easy to browse the archived images. They have been intelligently selected and are organized according to eighteen categories that conform to key areas of scholarly research on slavery and the slave trade and to the sorts of themes that are commonly covered by school and university curricula. The themes covered include slavery in Africa, the Middle Passage, New World plantation life and labor, slave housing and family life, free people of color, urban slavery, religion, military activities, punishments, rebellion and resistance, emancipation, and postslavery societies. There are also sections devoted to maps and to portraits of individuals, ranging from unnamed studies of Gold-Coast men and women from the seventeenth century to better-known images of named individuals, such as Toussaint Louverture and Frederick Douglass. The collection can also be searched using key words. The term Obeah, for example, brings up three images relating to religious practice, including a photograph of a Barbadian grave site; and the term sugar produces over one hundred images, most pertaining to aspects of sugar cultivation and production.

The Atlantic Slave Trade and Slave Life in the Americas is an excellent database. Scholars of the Atlantic slave system will be familiar with many of the images, but most researchers will discover something new. The site does not charge users to download images for use in educational and noncommercial activities, but it does ask users to provide a full reference to the site when citing the material. A few of the images are subject to copyright, and the contents of the site are not directly available as large high-quality files. This means that to find files suitable for use in publications, scholars might need to use the information provided on the site to look for the images elsewhere. This is not a problem, and the site is of great use as a resource and as a hub of information. Jerome S. Handler and Michael L. Tuite Jr. have performed an impressive and useful service to the growing global community of students and scholars working on Atlantic slavery.