Linus Pauling and the Race for DNA: A Documentary History
http://osulibrary.orst.edu/specialcollections/coll/pauling/dna/index.html
Created and maintained by the Special Collections division of the Valley Library, Oregon State University.
Reviewed June 814, 2007.

Over the past fifty years, the story of deciphering the structure of deoxyribonucleic acid (DNA) has received extraordinary coverage in media ranging from print to film to the World Wide Web, from academic monographs to best sellers such as The Double Helix (1968), written by one of the decrypters of DNA, James D. Watson. The attention is, of course, deserved. Along with the computer and the atomic bomb, DNA has been a defining element of postWorld War II science and culture, and is likely to become even more important in the coming decades.

Given the familiarity of this story, Oregon State Universitys Cliff Mead, Tom Hager, Chris Petersen, and Ryan Wick took on a difficult task when they decided to mount this Web exhibit. They had an ace card, however: Oregon State University Special Collections is the home of the Ava Helen and Linus Pauling Papers, an archive of over a half million items written or collected by the Paulings, as well as other documents related to the history of twentieth-century science and technology.

Linus Pauling was one of the most creative and wide-ranging scientists of that century, and the strength and uniqueness of this site derives from his personal record. The Web site’s creators have chosen documents wisely from the archive, focusing on the two years leading up to and just beyond the breakthrough by Watson and Francis Crick in 1953. (The home page notes that “scattered throughout the project are images of a number of very important and extremely rare items”; it would be helpful if the curators would highlight those unique documents, which include a prepublication typescript of Watson and Crick’s famous solution.) The site displays over sixty letters and a half dozen handwritten diary entries and lab notes exploring Pauling’s own efforts in the early 1950s to solve DNA’s structure, as well as hundreds of other items such as video interviews recorded decades later and photographs of the principal characters in this history. 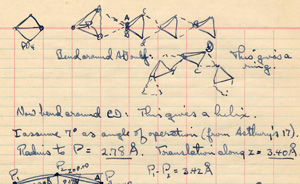 A brief narrative that puts Pauling, rather than Watson and Crick, at the center, frames the contents of the site but adds only modestly to the standard account found in books on the subject. The “Linus Pauling Day-By-Day” calendar is considerably more esoteric (January 20, 1952: “lp performs a remeasurement of the Lotmar-Picken muscle sample”) and might only be useful as a finding aid for those doing detailed studies in the field.

If as a whole the exhibit sheds only a little new light on the history of DNA research, many of the documents do provide significant insights into Pauling’s personality and his surprising financial and diplomatic problems during his competition with Watson and Crick. The letters and diaries help humanize Pauling and make palpably real his anxieties. In one 1953 letter to his son Peter, Linus laments his inability to buy a larger automobile for his family. Moments later he ponders buying a chic Austin-Healey sports car instead. Even a scientist in the midst of a seminal race for discovery has time for a midlife crisis.