“Maps do not talk simply of geography,” Peter Barber, the head of map collections at the British Library, observes. “They can tell us about the lives, preoccupations and values of their creators and users more clearly than words” (History Today, Nov. 2006, p. 4). In their telling, maps can thus help us understand how people have seen and read the world, how they explained to themselves what they did not know. 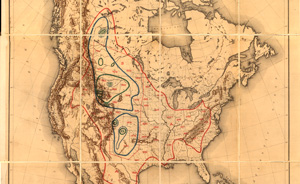 Some of this explanatory power is displayed in the Library of Congress Web site devoted to Conservation and Environment, whose organizing idea is to post maps that speak to human interaction with the land. The site’s short introduction notes:

The historic and more recent maps contained in this category show early exploration and subsequent land use in various areas of the United States. These maps show the changes in the landscape, including natural and man-made features, recreational and wilderness areas, geology, topography, wetland area, vegetation, and wildlife. Specific conservation projects such as the growth and development of U.S. National Parks are included in this category.

Subdivided into “Mapping the National Parks” and “Additional Conservation and Environment Cartographic Items,” and including separate indices for subject, creator, geographic location, and title, the site provides a number of navigational tools to locate its more than two hundred high-resolution digital images.

It is not clear that the search is worth the effort, however, for the site is something of a dumping ground. The thirty-six maps in the “Additional” category, for instance, cover the alphabet from “Amazon River (1788)” to “World. 1994.” There is little coherence in the subjects these maps portray, no guidance as to their significance, and their identity is often obscured by a table of contents that offers little clue to an individual map’s focus. Some are identified by geographical location (United States-Minnesota-Superior National Forest. 1994), but click on “World. 1994,” and you will discover that the actual image is “This dynamic planet: World map of volcanoes, earthquakes, impact craters, and plate tectonics.” "Middle West. 1998“ leads to an Army Corps of Engineers' depiction of ”Lakes in the Kansas City District.“ William T. Hornaday’s fascinating ”Map illustrating the extermination of the American bison“ is identified only as ”North America. 1889."

More sensible is the layout and contents of the “Mapping the National Parks” segment. Although limited in scope (it contains data only for Acadia, Grand Canyon, Great Smoky Mountains, and Yellowstone), uneven in its interpretative analyses (the Yellowstone essay is as brief as its maps are few) and annoying in its lack of graphic borders that would frame the text in the screen’s center to accommodate a reader’s eye, it is possible to absorb its prose, explore its mix of media, and come away with a deeper appreciation for the evolving landscapes these parks contain and have put on display for their many visitors. At its best moments, when “Mapping the National Parks” reveals Americans' fascination with and commitment to wild lands and scenic gems, it begins to fulfill Barber’s dictum that cartography is history.