Many history educators by now feel they should use primary documents in their teaching and that the World Wide Web offers a trove of such materials. Less clear are issues of implementation and purpose: Which documents to use? How, and to what end? Picturing Modern America is a teaching resource that addresses these issues in useful, innovative ways. The site will help teachers and students to identify visual materials that are often overlooked in history education and to use them as springboards for developing historical thinking skills. While intended specifically for middle and high school classrooms, it may prove useful in college settings, too.

Picturing Modern America can be understood in part as a companion to the rich but often daunting array of online materials in the American Memory collections of the Library of Congress. The site guides students through preliminary investigations of key topics in U.S. history from 1880 to 1920, with small sets of images (mostly photographs) serving as the jumping-off point; at the conclusion of these initial queries and “historical thinking exercises,” the user can then follow links to related materials in American Memory. 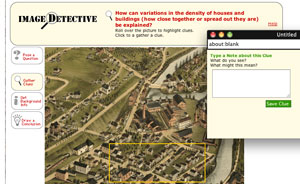 The exercises in Picturing Modern America are useful teaching tools in their own right. From the home page, there are three main ways to begin. The most basic is “Image Detective,” which teaches students how to analyze a single photograph. The section contains nine images on topics such as immigration, cities, and World War I. After choosing an image, the user moves step by step through a series of pop-up boxes, posing a question, making observations about key details, and drawing conclusions. Relevant background information is available along the way, though this feature is nicely designed to complement, not overshadow, the student’s own thinking.

In the second main section of the site, called “Investigations,” students analyze small sets of images relating to women’s roles, prairie settlement, child labor, or Indians. These exercises emphasize pattern and contrast; for instance, activities on the distinctive approaches of the photographers Lewis Hine and Edward Curtis present students with groups of images and ask them to identify the ones made by the featured photographer.

The last and most ambitious section is “Exhibit Builder,” in which students create and save their own online exhibits, using images from American Memory and text they write themselves. Here one can delve more deeply into one of the topics introduced elsewhere in the site, shifting easily between American Memory and tools within Picturing Modern America that make it possible to select, annotate, and arrange images into a slide show. “Exhibit builder” is under construction; while the tools were fully functional as of the date of this review, only three of the nine topics contained document sets; completion of the others will add greatly to the usefulness of the section.

Also in need of some further development is a feature that enables students to compare their ideas to those of other students, teachers, and scholars; this is a wonderful feature, though it does not seem to have been used much thus far.

In all, Picturing Modern America is a notable and still-too-rare attempt to use the interactivity of the Web to present history as an ongoing act of inquiry and investigation. Hunches, hypotheses, evidence, interpretationall are emphasized and encouraged here, to the benefit of history education.