This digital exhibition features photographs taken by Father Augustine Schwarz (1887 1946) during the quarter century he served as a Catholic missionary to American Indians in Arizona. The photographs portray missionaries and mission scenes, churches, chapels and other mission buildings, and Pima, Papago, and Apache Indians. Curatorial text supports the images. St. John’s Mission in the Gila River Indian Community village of Komatke received the most extensive photographic coverage. That section includes information on teachers, students, curriculum, the St. John’s Mission Band, and daily life at the mission.

The Labriola National American Indian Data Center in the Arizona State University libraries received the Schwarz family donation in June 2000. In addition to Schwarz’s Arizona photographs, the collection includes scenes taken during his visit to New Mexico, a score of postcards, and some photographs taken by Arnold Schwarz, Augustine’s brother, during his missionary service to the Whiteriver Apaches of northern Arizona. The entire collection consists of 179 images. 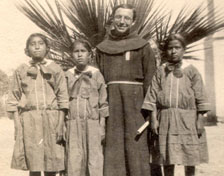 Patricia A. Etter, the curator, states that the aim of the exhibition is to reconstruct Schwarz’s “service to his Church and the Native people of Arizona through his photographs.” Schwarz often wrote descriptions on the reverse, and a number are included in the exhibition. His descriptions help identify sites and provide a chronology, but Etter and her colleagues have filled in many gaps. In the “View Entire Collection” section, visitors can maximize thumbnails of all the images and read captions. Throughout, accession number identification facilitates the ordering of print copies.

Schwarz’s missionary service focused on the Pimas of central Arizona, the Papagos (Tohono O’odham) of the south, and the Apaches in the Whiteriver area of the north. The photographs are organized into sections titled “Mission to Pimería,” "Mission to Papaguería,“ and ”Mission to Apachería.“ Schwarz built a number of chapels on the reservations, and many of the mission buildings he photographed no longer exist. Etter and her staff visited the reservations and took color photographs of the remaining buildings as they appeared at the beginning of the twenty- first century. These are included and described separately in each section. Etter writes, ”Most churches, many now eighty years old, remain a central part of the village, see regular use, and have been well cared for."

The exhibition Web site is attractive and easy to navigate. The home page links to nine main sections. In addition to the mission photographs, the site includes a helpful biography of Schwarz, an interactive map of Arizona missions linking to the photographs, and a list of references cited. Visitors are encouraged to provide feedback via a “Comments” e-mail link.

Father Schwarz’s photographs provide rare visual documentation of Catholic missionary activities among Arizona Indians in the first half of the twentieth century. They will be of interest to anthropologists, ethnohistorians, and historians of religion and architecture in the American Southwest. Etter and her colleagues are to be congratulated for bringing Schwarz’s photographs to light in such a thoughtful and timely way. Mission to Arizona should serve as a model for archivists seeking to make their visual collections more widely known and accessible.