A welcome addition to the list of online sheet music resources, the UCLA Digital Archive of Popular American Music is a work in progress that draws on the universitys extraordinary musical collections. Like similar Web sites, it is somewhat hit-or-miss and has its own way of classifying materials, but is nicely designed and notable for the richness of its twentieth-century examples. The most recent sheet music posted when I last visited the site dated from 1966. The University of California, Los Angeles UCLA music library collection itself is also strong in theatrical music, although I did not find examples I expected to be there. That completely unscientific search aside, the more show music posted in the future, the better. Naturally, copyright considerations restrict what can appear, but even as the site stands now it is essential for anyone working on twentieth-century popular song. 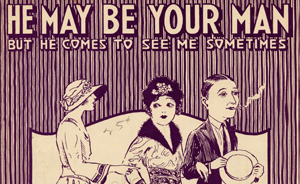 The collection is less useful for earlier periods. A search for composers named Foster (as in Stephen) resulted in only one hit. That is not to say nineteenth-century historians should ignore this site. A search on an important musical play from the 1860s, The Black Crook, yielded six items, a respectable showing compared to seven in my universitys Lester S. Levy Collection of Sheet Music site, which is notably strong in nineteenth-century materials.

For the most part, the UCLA Digital Archive is user-friendly, once the user understands the classification scheme of the collection. (Lack of standardization across collections means that users have to learn the quirks of each.) The images of covers, in bitmap format, are of reasonable size and clarity. Although a better option—taken by only few other sites—is to offer a choice of high or low resolutions.

The UCLA Digital Archive also has some useful and rare features. One is a set of links to other sites, twelve of them as of October 29, 2006 (one of which did not work). Another is the ability to zoom in on covers in increments. Most innovative, however, is the ability of a user to set up a virtual collection, add notes to each entry, and to share it (or not) with others. A user, for example, set up a public access collection of the songs of Jerome Kern. That is a valuable bit of participatory democracy other sites might well emulate.

The site has one serious limitation. Unless I missed something, a visitor can view the cover and learn important facts, including the key, but not see the music and lyrics—in other words, the song. That is also true of a majority of sheet music sites linked to UCLAs, but it is a major omission if historians are ever going to go beyond thinking about popular music as either providing colorful images for teaching or as words that happen to be sung.

The UCLA Digital Archive is a significant contribution to the online historical record, based on a first-rate collection, but, like other such sites, it is badly in need of serious thought about what to post and how to organize it.