In the mid-1990s, the historian of prohibition K. Austin Kerr created a Web site entitled Temperance and Prohibition to provide an informed overview to the general reader. The site is a series of short essays on the temperance movement and national prohibition, such as “Why Prohibition?,” "The Brewing Industry and Prohibition,“ "The Women’s Crusade of 1873–74,” "The Anti-Saloon League,“ "The Ohio Dry Campaign of 1918,” and “Medicinal Alcohol.” They are hyperlinked to each other and to dozens of relevant photographs, political cartoons, charts, graphs, and excerpts from primary documents. 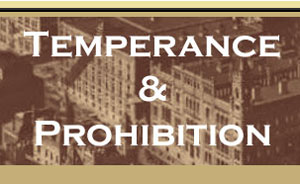 This site was obviously produced by a pioneering amateur rather than a professional Web designer. It is difficult to navigate: there is no way to get an overview of the site, and some images and texts are embedded several layers within it. It would be optimal to have a way to access the primary documents directly. The site is also idiosyncratic, focusing on those aspects of the movement in which its creator is most interested. Ohio gets disproportionate attention, for instance, and the Anti-Saloon League and the prohibition period generally are much more prominently featured than the Woman’s Christian Temperance movement and the earlier years of the movement.

Yet it is a very compelling site. The images and documents are carefully selected, and there are so many gems among them, from such a diverse body of sources, that it could only have been produced by someone intimately familiar with the subject. Rep. Richmond P. Hobson’s 1914 speech in favor of the prohibition amendment, for instance, asserts that liquor “reverses the life principles of the universe”; the speech also breaks down the effects of drink into racial categories, stressing the different responses to drink of “the red man,” "the black man,“ and ”the white man." This speech both jarringly presents the difference between early twentieth-century prohibition thought and our own, and points to the connections between the movement and contemporary ideas such as racial science. Other primary materials were selected with similar discrimination.

The essays do an excellent job distilling the major ideas in the field into a few brief and engaging paragraphs. Going through the site feels like sitting down with a helpful expert on a subject with which one is unfamiliar. The site has a number of other nice touches: visitors can choose to view it to the accompaniment of a piece of prohibition-era music, the “Twelfth Street Rag.” 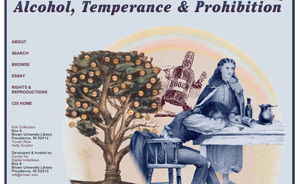 Brown University’s Alcohol, Temperance, and Prohibition site is very different in style, scope, and content. It is much newer: it has been in the works since 2002, and new material is still being added. It is well resourced and professionally produced. It is also quite large: at the time this review was written, the site included over sixteen hundred high-resolution scans of primary documents from the early nineteenth century through the 1970s.

The documents on Brown’s site, from its special collections, are mainly broadsides and pamphlets, with some sheet music, programs, and a few longer booklets. With a few exceptions (mainly drinking songs), the materials are pro-temperance or pro-prohibition. They range from classics, such as the antebellum broadside, “Deacon Giles' Distillery,” to the bizarre: one 1925 pamphlet, “Who Tells You What to Think?” suggests that French winegrowers, who already have Canadians in thrall, are exercising dangerous influence on U.S. politics by opposing prohibition.

This site is an enormously valuable resource: its scope and quality make it an outstanding resource for students and specialists alike. There are, however, ways it could be improved. First, and most problematically, a visitor who clicks onto the “Historical Essay” link on the first page is brought to an essay written by an undergraduate in an introductory course. The fact that the essay is by a student is only indicated by a note at the end. It is a smart undergraduate essay and makes some interesting points, but there are many good reasons why introductory undergraduate academic work is rarely published, and they apply here as well. The writer, not being familiar with the field, casually perpetuates conventional wisdom about the temperance movement (such as the idea that it was the last gasp of Puritanism) that is widely rejected by specialists. Yet it is far from impossible that this essay will be read more broadly than academic books by specialists. By appearing to lend Brown University’s authority to this analysis, the site does a disservice to its visitors. Apparently, the plan is to add more such essays to the site: I would encourage those constructing the site to reconsider that plan. Ideally, they should include an essay by someone such as K. Austin Kerr. At the very least, they should clearly identify the essays as undergraduate work.

The site could also be improved by enhancing the browse and search functions. For instance, there is no apparent way to pull up all of the documents from a particular period or to search by subject. One can approximate browsing by date by searching for all documents within a date range containing certain common terms, but this is inconvenient and still misses many documents. Also, the creators of the site could clean up their bibliographic entries. To use the site’s “browse by publisher” function to survey texts published by “American Issue Publishing Company” of Westerville, Ohio, for instance, the viewer has to look through nine index entries, ranging from two for “American Issue Publishing Company” (perhaps with different spacing?) to “American Issue Pub. Co.”

These two sites each have their place and are excellent representatives of the two most common forms of academic Web sites: the hyperlinked historical essay, which has reached its apotheosis with the Women and Social Movements in the United States, 1600–2000 site, and the Web archive. Like most hyperlinked essays, K. Austin Kerr’s site (which, apparently, is slated to be updated) provides a popular audience with a guided introduction to the field. Brown’s site will be most useful to academic historians working at all stages.