The Encyclopedia of Chicago
http://www.encyclopedia.chicagohistory.org/
Published and maintained by the Chicago History Museum, the Newberry Library, and Northwestern University.
Reviewed June-Oct. 2006.

Brilliantly conceptualized, edited, managed, and produced, the print and online Encyclopedia of Chicago has been a huge collective effort that resulted in one of the very finest and likely one of the most durable works of North American historical scholarship in our era, a worthy match for another such durable work, The Encyclopedia of New York City (Columbia University Press, 1998), edited by Kenneth R. Jackson and involving 700 credited contributors over ten years. The 633 listed authors of the Chicago team worked for about tens years also, which may be the minimum duration of such undertakings. Unlike The Encyclopedia of New York City, however, The Encyclopedia of Chicago was planned from the outset of the project to be both a print and online publication. This is primarily a review of the electronic edition, but comparison of both formats is important.

The print version opens with a declaration that The editors of The Encyclopedia of Chicago began with a commitment to a vision of a metropolitan area whose past, present, and future rest on the principle of interdependence (xxv). Thus, while the Encyclopedia of Chicago focuses on the city of Chicago, it also covers the roughly 225 metropolitan towns and cities that encircle the city out to a radius of about sixty miles from the Loop (Chicagos downtown center). Its actual scope, however, is harder to state than this excellent principle of metropolitanism, because Chicago is a global intersection among all peoples of the world. Chicago, in particular, is arguably the North American city with the greatest volume of scholarship devoted it, so the challenge of capitalizing on that rich heritage was very great. 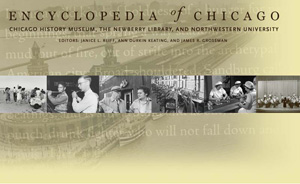 Despite the potentially unlimited subject, the Encyclopedia of Chicago is a wide-ranging, highly coherent work, covering such topics as the myriad immigrant populations in great detail. The editors of this work on a city of neighborhoods also commissioned detailed entries organized by Chicagos unusual system of seventy-seven community areas, established by University of Chicago sociologists in the 1920s and widely recognized ever since (unusual because few cities have such a clear system). Each community area entry has a thumbnail map clearly indicating its location in the metropolis and supplies a uniformly formatted demographic table covering the years 19302000. Such comprehensive coverage shows both how the editors are true successors of the Chicago School of urban sociologists and how they have carefully built on the mountain of prior research produced by that school. The online version supplies a map of the community areas, but would be improved by giving readers the ability to click directly on individual areas.

Does the online edition offer significant advantages over the print version? The print version runs 1,117 pages; the electronic version cannot be given a similar figure, but, as far as this reviewer could determine, the number and length of the entries are the same. The most important difference is one of availability: the online version is free to the entire world, making it far more available than the print version. The online edition is meticulously hyperlinked so that readers may explore topics easily and intelligently. This is not a difference in kind from the print edition because the same cross-reference terms are highlighted in the print version in small capitals, and readers of encyclopedias can locate the related entry with little difficulty, provided they know the alphabet. What does make some difference is the online editions special navigational features. One of these is a breadcrumb record of pages visited in a given session (but in the present version, a users session cannot be saved). Readers can track their path backward more easily than in the print version, but again, this is a difference of degree, not kind.

The most powerful and substantive difference between the print and electronic editions lies in the interactive presentation of maps and Historical Sources (mostly graphic arts and photographs, but also manuscript and print sources). Michael Conzen, the Cartographic Editor, was also the leading creator behind the extraordinary cartography that enriches both the print and online editions, and many other scholars are credited as authors. Composed of exquisitely detailed syntheses of a huge range of underlying data and imaginatively symbolized, the maps are, in themselves, a major achievement in urban history. Readers unfamiliar with urban scholarship may not be aware of the labor each map represents, uniting data from disparate sources, including maps of widely different scales and dates of origin, into a single cartographic design. Although there are only two, a special category of Rich Maps enables users to sift through overlays of variables. The resulting array of maps maintains a uniform legibility and comparability across the widest range of subject matter and functions like an atlas. But these maps are not just works in themselves, because the editors have integrated them so thoroughly with the textual entries. 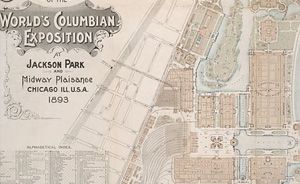 Apart from the new cartography produced for this encyclopedia, the editors have included hundreds of high resolution scans of photographs, graphics (including more than fifty historical maps), and documents (manuscripts, typescripts, and printed materials). In the print version, these usually serve as illustrations, rarely large enough to reveal much detail. In the online edition, however, the user can study the full artifact presented via a consistent, intuitive, and reasonably fast image inspector that zooms, pans, and rotates. Digital publishing allows for oversized maps and manuscripts that can be read a close range and fine historical photography that reveals details for serious study, a clear payoff in the online Encyclopedia.

There are some limitations to the Encyclopedia of Chicago, some of which would not be difficult to rectify in future revisions. Above all, the online edition fails to take advantage of the digital mediums powerful new ways to organize knowledge and instead mimics the print versions standard alphabetical structure. Alphabetical adjacency is workable and familiar, but it is a bizarre and certainly random way to present historical knowledge since almost nothing in the world takes place in alphabetical order. The keyword searcha familiar online toolis not necessarily better than the fine index in the printed version. Absent a subject-based or hierarchical classification scheme for the entries, it merely scrapes together all entries containing the keyword. For example, Charles E. Merriam, the important political scientist and reform politician from the University of Chicago, shows up in nearly 20 entries after a keyword search, but the reader is given no clue as to why and must visit each entry in order to find out. The printed index, however, gives the reasons: electoral defeat of, B32, 700; on fragmented governance, 350, 355–56, and so on (1092). Allowing the reader at least to browse by subject would be a major, and rather obvious, break from the limitations of print encyclopedias.

Another limitation of both the print and online editions is the absence of entries on individuals. Even an individual as important as Jane Addams does not have her own entry. Instead, the editors commissioned a Biographical Dictionary, compiled by Christina A. Reynan, covering more than two thousand significant individuals, with minimum (but precise) information on each: Addams, Jane. b Sept. 6, 1860, Cedarville, IL; d May 21, 1935, Chicago. Social reformer; founded Hull House; won Nobel Peace Prize (1931). A search of Addams in the online version yields seventy-three items, which, collectively, detail Addamss involvement or leadership in a host of issues, events, and institutions. But without subject terms or a longer life-history-style entry (such at the those included in the Encyclopedia of New York City), the readers ability to sift through all those fragments of Addamss life is severely limited. Hopefully, future editions of The Encyclopedia of Chicago can expand the Biographical Dictionary to serve as an instrument of integration.

The Encyclopedia of Chicago is a superb scholarly resource, setting a high standard for reference works on the Internet. It provides full source documentation on every entry and artifact and does not allow external links, so every particle of content is attributable to the authors, editors, and publishers. But the publishers have stopped short of their duty. They do not provide students and scholars with a how to cite guide, and there are two versions of the title on the home page (with and without the word, Electronic). The title of the Encyclopedia is also open to question, because this is clearly a historical encyclopedia. Crime and Chicagos Image,#8221; for example, covers only the era of Al Capone, as though crime were a thing of the past. This is perfectly legitimate for a historical encyclopedia, but the title will mislead those searching online for current information.

Overall, the online Encyclopedia of Chicago is far more voluminous, comprehensive, and coherent than the current “Chicago” entry in the fast-growing Wikipedia, but in today’s fast-changing online environment, the editors of future revisions should pay close attention to the many possibilities for enriching this fine work with linked databases created by universities and other reliable institutions, alternate structures of presentation, and options for user feedback. In its first version, the online Encyclopedia of Chicago risks being overshadowed by resources that take greater advantage of the electronic medium.