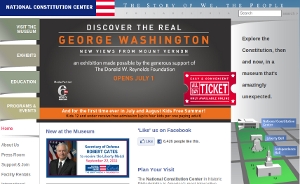 The intended audience for the Web site and for the National Constitution Center as a whole seems to be elementary and middle school students and their teachers. For example, the August calendar of events began with “The Phanatic around Town,” an exhibition of fiberglass statues of the Phillie Phanatic, the Philadelphia Phillies baseball mascot. The connection with the Constitution is obscure. There was also a special interactive program on “Beating the Heat” during Philadelphia summers and an exhibition of paired photos by children in Philadelphia and Afghanistan.

I visited the museum earlier in the summer to see a very entertaining exhibit comparing modern America with imperial Rome, but that also more or less overlooked the Constitution itself and the interesting Rome/United States comparison left no trace on the Web site. The permanent exhibit was chaotic, except for a collection of statues of the constitutional framers, which the children who were present clearly enjoyed. Nothing else seemed to capture their interest. The Web site gave scant indication of what would be found at the center, perhaps because the presentation there is so incoherent that it would be hard to describe.

Scouring the site for something worth mentioning, I found useful fragments in the “Educators” and “Students” sections, and among the podcasts. The “Educators” section has a link to “Classroom Resources,” which links to “Print Materials,” which takes the viewer to a list of lesson plans, biographies of the constitutional convention delegates, and some primary materials, such as texts of the Declaration of Independence and the U. S. Constitution. A link to “Secondary Sources” was not operative.

The most interesting item on the site was a podcast (under both “Exhibits” and “Programs and Events”) of the campaign speech on race that Barack Obama presented at the Constitution Center in 2008. The podcasts were the only real use of “new media” on the site, and anyone who stumbles upon them and listens will be left with something to think about. Otherwise, the National Constitution Center Web site is just another missed opportunity to interest Americans in their Constitution, the legal system it establishes, and the values that it represents.