Mapping Decline: St. Louis and the American City
http://mappingdecline.lib.uiowa.edu/
Created by Colin Gordon and maintained by the University of Iowa Library.
Reviewed Aug., 2012.

Mapping, as a visual representation of space, has found a new prominence in urban history. Digital technology has brought together cartography and data analysis in ways that allow scholars to produce maps that would have seemed nearly impossible to create just twenty years ago. One need only look back at the methodological note in William Cronon’s Nature’s Metropolis (1991) to realize just how much work went into creating a simple thematic map of bankruptcy filings in 1991, or to realize just how easy the creation would be now. Mapping Decline illustrates how far the technologyand historians' use of ithas come. 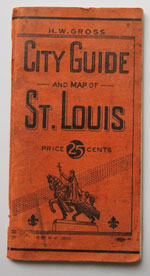 The Web site uses thematic maps and hosts primary sources to develop four themes from Colin Gordon’s 2008 book Mapping Decline: white flight, race and property, municipal zoning, and urban renewal. Each theme is tabbed on the site, and the four tabs reveal maps that help illustrate the multifaceted causes and consequences of central-city disinvestment and demographic transformation in twentieth-century St. Louis. For each set of maps in each tabbed section Gordon offers a brief overview and an analysis of the programs and policies that altered the city’s demography. The series of maps under the “White Flight” tab, for example, illustrate the stark and evocative shifts in white and black populations.

The primary-source documents, more than twenty-five in all, provide another means of understanding the transformation of St. Louis. The portable document format files (pdfs) available for download include several historic demographic maps and city plans, a restrictive covenant for limiting a property to occupancy only by Caucasians, and suburban municipal zoning maps.

In its conception and execution the Mapping Decline site is a good resource that begins to illustrate the spatial nature of the twentieth-century urban crisis in a way that historians have not often attempted. It points the way to opportunities for other scholars of metropolitan history to break their reliance on text for communication. The site can be a useful and intriguing teaching resource for U.S. and urban historians, even used independently, without the book.

The site does retain some of the tensions of the book, however, and also illustrates the limitations and trade-offs of a Web project conceived as an adjunct to a book rather than as an autonomous digital project. In both formats the author emphasizes white racism, flight, and exclusion, with only limited illustration of black resistance or the contested nature of this metropolitan change. The site suffers even more clearly from the limited ability of maps to offer counternarratives or foregone alternativesimportant features of historical scholarship.

Gordon passes up some simple means of exploiting the World Wide Web and digital research methods that could make the site more informative and useful as a digital resource. The pdf documents are treated as digital versions of paper artifactsthere is no optical character recognition to enable text searching within the sources, for example. The maps themselves, created with ArcGIS software, are layered representational images on the sitethey contain no data that might be downloaded or repurposed by researchers interested in investigating further or in questioning Gordon’s analysis. To do that, a user must leave the site and embark on an independent quest for data.

Mapping Decline is a useful and visually appealing site that, in its successes and its failings, points the digital way forward for urban historians.