The goal of the New York Philharmonic’s digital archives is to make available all of the organization’s historical documents. Because creating such a comprehensive resource is no small taskthe orchestra began operations in 1842the philharmonic opted to start with a portion of its materialsspecifically those from what the Web site labels the International Era (spanning 1942 to 1970). During this time the orchestra took its place as a premier ensemble in the world, just as the United States became a world power. It might be more apt to call this the Leonard Bernstein era since the chronology neatly bookends his debut with the group (in 1942) and his retirement as music director (in 1969). Of the more than 24,000 documents currently available, almost 4,000 are associated with Bernstein; this is considerably more than the 1,177 linked with Bernstein’s colleague Andre Kostelanetz, the conductor of the philharmonic’s popular concerts. For scholars who study Bernstein, then, this site provides an invaluable look at primary materials, although those who are more generally interested in the orchestra’s history will also find it worthwhile. 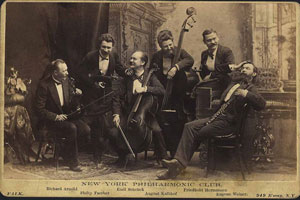 Materials are classified in the following cross-referenced categories: programs (3,235 documents), scores (1,380 documents, half of which were Bernstein’s), images (16,342), and business documents (3,087, but anticipated to rise to 8,000 soon). In the future, the philharmonic hopes to add audio and video examples to the archive, along with press clippings and concert magazines. The scores probably will be most valuable to scholars in musical disciplines, while the programs and business documents will be useful for those interested in the orchestra’s onstage and offstage history. The “Images” section is the weakest part of the archive because there is very little metadata associated with the material. Users are able to add tags to the photos, making them more functional in the future.

Ease of use makes the site particularly strong. The interface is very intuitive and the documents can be searched by person, date, or keyword, with Boolean search options available; at this time it is not possible to search through all of the text, but this feature is rumored to be coming soon. The visual clarity of the documents is quite impressive, allowing users to magnify small portions of the scores and business documents. There is only one drawback to such high resolution: because of their size, some of the files took a long time to load, and in a few cases they would not load at all. It is clear that the archivists have taken the time to consider the needs of researchers: they have established an e-mail list for archive update announcements, created a video tutorial, and provided detailed information about what is (and is not) available. Although the documents offered on the site are currently chronologically limited, this material already creates the potential for new discoveries. When complete, this digital archive should prove extremely valuable for researchers.