The site’s browsing options can quickly generate many results that will be of interest to historians in multiple fields. Visitors who browse by “place” will find approximately two hundred spectacular recordings from Latin American locations such as Havana, La Paz, and Caracas. Recordings from Tokyo, Constantinople, and Bucharest demonstrate that the company expressed an early interest in markets far beyond the United States. The site’s authors classified over seven hundred recordings as “ethnic characterizations”recordings comprising “text and music that may involve characters and/or musical elements that  may utilize outmoded and offensive stereotypes of nationalities, religions, or races.” Many of these recordings demonstrate the early twentieth-century incarnation of the minstrel and, later, “coon song” genres that saturated U.S. popular culture for most of the nineteenth century. Many other groups also figure in this category, including American Indians and the Irish, which both featured in the 1906 Arthur Collins and Byron G. Harlan recording, “Arrah Wanna.” Visitors can also search by “language” and by “target audience” to find an exceedingly diverse array of recordings that the Victor Company marketed to U.S. immigrant communities. The “Spoken Word” category reveals that a number of U.S. presidents recorded speeches for the company. Theodore Roosevelt, for example, reproduced in Emporia, Kansas, an excerpt from his own popular “The ‘Abyssinian treatment’ Administered to Standard Oil.” 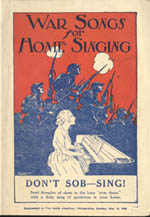 Although the site features an interesting selection of rare books and manuscripts from the university’s libraries, the exhibit lacks a unifying narrative or an argument. In addition, the technology used allows the visitor to see only a one-page area (or less) of a scanned book when the screen view is expanded. (Contrast this with the technology that allowed the Library of Congress to create the interactive Victrola Book of the Opera.) Finally, the music samples that accompany the images and text are just thatbrief snippets of songs, restricted by copyright laws. Together, both sites reveal the evolution of Web technology, utility, and design as they relate to music archives, as well as the power of copyright law, as it likely will continue to circumscribe our application of music in the digital humanities for decades to come.