Lewis and Clark: The Journey of the Corps of Discovery
home | many pasts | evidence | www.history | blackboard | reference
talking history | syllabi | students | teachers | puzzle | about us

The Journals of the Lewis and Clark Expedition
http://lewisandclarkjournals.unl.edu
Gary Dunham and Katherine Walter; University of Nebraska Press, Center for Great Plains Studies, Center for Digital Research in the Humanities
Reviewed March 20—26, 2008

The recently concluded bicentennial of the Lewis and Clark expedition was hard to ignore. Between 2003 and 2006, students and enthusiasts of Meriwether Lewis, William Clark, and their world staged a host of events designed to raise public awareness of the expedition. Additionally, the years immediately before and during the bicentennial saw the release of a large number of new books and films, as well as a great deal of new online content designed to make the expedition accessible to scholars, students, and the general public. Two Web sites in particular that emerged from the bicentennial commemoration should prove to be valuable resources for scholars and educators for years. 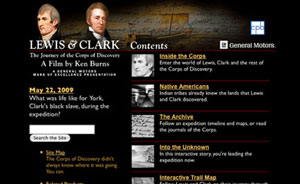 Lewis and Clark: The Journey of the Corps of Discovery is a companion site to the award-winning 1997 film of the same name produced by Ken Burns and Dayton Duncan. Like many sites launched as documentary film companions, this one contains content designed to add to the experiences of viewers of the film. Two groups of users will find it helpful: viewers of the film looking for more information and educators looking to develop lessons, lectures, or discussions with Lewis and Clark content. Viewers of the Burns and Duncan film will be interested to find extended interviews with many of the scholars and experts who contributed to that production, including John Logan Allen and James P. Ronda. There is also an interview with the filmmaker Burns on a separate page. The site also contains an “Interactive Trail Map” that will probably disappoint users of Web-based interactive map platforms such as Google Earth and Microsoft Live Search. The “Interactive Trail Map” simply provides links to separate pages, one for each state that Lewis and Clark passed through, which in turn list a few Lewis and Clark—related Web resources for that state—it is good information, but hardly “interactive” on a scale that most Web users have come to expect. All told, the film-related content on Lewis and Clark: The Journey of the Corps of Discovery is about what one would expect to find in a well-done special features section of a DVD.

In contrast, the content directed toward students and educators on the site has a great deal more to offer. The page called “Into the Unknown” opens up a truly interactive experience inside a pop-up window. Users are provided with what is essentially a “choose-your-own-adventure” experience as they guide the Corps of Discovery from Fort Mandan to the Pacific Ocean. Actual events of the expedition are described and then different choices are posed to users (for example, should the Corps of Discovery study or kill a bear that threatens to attack them? Should they camp during a sandstorm or push on into it?). Each choice leads to a different outcome, allowing students to appreciate the contingency of history. The level of complexity seems pitched at middle school students, but could appeal to high school students and advanced elementary school students as well. Additionally, the site provides extensive Lewis and Clark—related lesson plans for all grades K—12 and not only for history classes, but also for science, math, and language arts. The site’s producers have gone a long way toward making the film, and the Lewis and Clark expedition more generally, a teaching resource for a variety of educators. 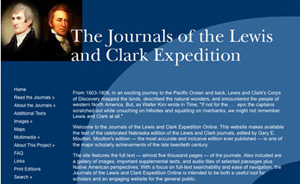 Where Lewis and Clark: The Journey of the Corps of Discovery is primarily aimed at educators, students, and DVD viewers, The Journals of the Lewis and Clark Expedition site is solidly aimed at a scholarly audience. The site is the official companion to the recently concluded Journals of the Lewis and Clark Expedition editorial project, prepared under the editorship of Gary E. Moulton and published by the University of Nebraska Press. Prepared in accordance with modern standards for documentary editing and annotation, the complete thirteen-volume collection has already proven to be a valuable resource for scholars. Attempting to make the project accessible to those who do not have regular access to the library of a research university, Moulton and Nebraska prepared and released two annotations of the Journals of the Lewis and Clark Expedition project—a seven-volume soft-cover “definitive edition,” and a one-volume “abridgment.”

The Journals of the Lewis and Clark Expedition site goes further to expand the audience of the project. The site contains the complete text of the thirteen-volume edition as well as the editorial apparatus, making the complete Journals available to anyone. Even scholars already in possession of any of the three editions of the printed Journals will find the site useful. Multiple search functions are supported—users can execute basic and advanced keyword searches, search an interactive index, and use TokenX, a program that charts word-use frequency and allows searches for nonstandard spellings. Additionally, the site reproduces the maps from the published Journals, selected images of actual documents, and pictures and drawings related to the expedition from other sources. Scholars will also be pleasantly surprised to find over two dozen journal articles reproduced in full—many from state-level journals not available on JSTOR. All told, the Journals of the Lewis and Clark Expedition site is a serious scholarly resource that should reward researchers of the Lewis and Clark expedition for years to come.