Virtual Jamestown is an ambitious Web project that “explores the legacies of the Jamestown settlement and the Virginia experiment'” during the period from 1570 to 1720. The site, as both a digital archive and a teaching resource, seeks to offer visitors the opportunity to explore the founding of Jamestown, the first permanent English settlement in North America, and follow the complex and at times unexpected interactions of European, African, and Indian over the next century. Virtual Jamestown succeeds splendidly with its wealth of documents, scholarly apparatus, and imaginative hypertext presentation of those resources. 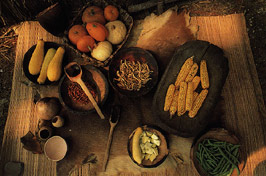 After the opening splash page, a “Whats New” heading greets you along with a column of links to the various sections; overall the site is well organized and easily navigable. Careful thought has been given to allowing visitors to move through the ample documentation—for this is a digital archive at its core, with maps and images, court records, labor contracts, first-hand accounts, newspapers, and other documents. Each resource section offers a good introduction that explains the type of source and its limitations. Documents from the e-text center at the University of Virginia can be viewed in a modern spelling version or in their original spelling. The Reference Center provides a timeline with a global context, a bibliography, and biographies to enhance the sites usability for student, scholar, and visitor alike. Several prominent scholars have contributed excellent interpretive essays with suggested reading lists. Beyond the purely textual, Virtual Jamestown features a Jamestown Interactive section with innovative electronic presentations such as Flash maps of the Chesapeake region that allow visitors to reconstruct John Smiths voyages from his maps and writings; you can overlay Smiths place names or modern ones or play a movie to see Smiths voyages of 1608.

Those innovative techniques extend to the rich visual archive with its maps and images and artifacts. I especially appreciated the presentation of the work of John White and Theodor De Bry. The artist and cartographer White accompanied the English voyage to Roanoke Island in 1585. He made over seventy relatively accurate watercolor drawings of plants, people, and animals that contrast with De Brys engravings of the drawings, which resort to various stylistic and cultural conventions. Virtual Jamestown displays Whites and De Brys images side by side with additional information (one layer down) about what is missing in the images of Indian villages or what we might be seeing in the ceremonial rituals being depicted, reminding us of the power of juxtaposition for visual and material objects. That graphic principle is second nature to museum exhibition designers but needs to be stressed to those of us who all share training in textual sources.

While all Web sites are “under construction,” Virtual Jamestown is so in the best sense of the word, as additional databases and resources come online. Affiliated projects such as a database of indentured servants contracts and another on eighteenth-century Virginia newspaper advertisements for runaways add to the Web sites rich resources. Teaching resources extend the practical use of the site to instructors and students. This ambitious project has been well recognized by regional and national funding agencies. Virtual Jamestown offers a wide audience, general and specialist alike, the power of new media along with first-rate archival work to tell us all something about this significant historical site in North American history.